From Zelda Dungeon Wiki
Jump to navigation Jump to search
Want an adless experience? Log in or Create an account.
Song of Healing 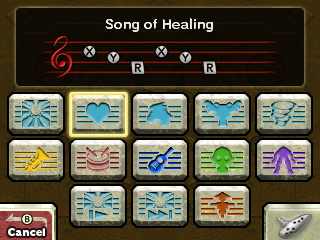 The Song of Healing is a song in Majora's Mask and Spirit Tracks.

The Song of Healing is the second song Link learns on the Ocarina of Time in Majora's Mask. After Link retrieves the Ocarina of Time from the Skull Kid and learns the Song of Time, he can play that song and return to the Dawn of the First Day. Upon returning to the Happy Mask Salesman, he will play the Song of Healing on his piano and teach it to him. After he has learned it, Link will turn back into Hylian form and get the Deku Mask. Wearing this mask will allow him to transform back into Deku Link whenever he wishes.

To hear this song on the Ocarina of Time:

The Song of Healing is one of the songs Link howls while in wolf-form to make the Hero's Spirit appear.

This song is a song that, unlike its Majora's Mask counterpart, actually heals Link. It summons the Spirit of Healing, a fairy-like creature, and can only be used once per dungeon. Link learns it on the Spirit Flute from a Sound Stone in the Forest Temple.

To hear it, play the green, white, and green notes in that order.