From Zelda Dungeon Wiki
Jump to navigation Jump to search
Want an adless experience? Log in or Create an account.
Elegy of Emptiness 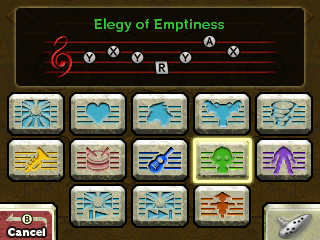 The Elegy of Emptiness is an ocarina song learned in Majora's Mask. Link learns the song from Igos du Ikana after he defeats him in Ikana Castle.

The song, when played, leaves a statue behind where Link was standing, which can be used to hold switches down. One statue can be used for each form (Deku Scrub, Zora, Goron, Hylian), which means up to four statues can be out at once. Some switches are bigger, however, and the Goron statue must be used for these switches. The Deku Link statue is far too light for most switches, so it isn't used as much.

The Elegy of Emptiness is used to get into Stone Tower Temple, as well as to solve many puzzles inside.