From Zelda Dungeon Wiki
Jump to navigation Jump to search
Want an adless experience? Log in or Create an account.
Goron 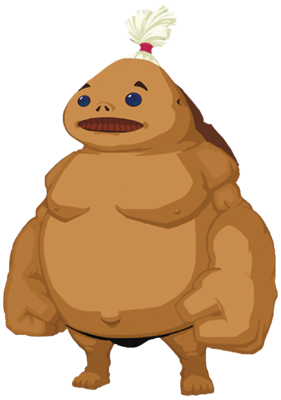 Concept art for a Breath of the Wild Goron

Gorons are rock-like creatures that made their first appearance in Ocarina of Time. They are brown/gold mountain-dwelling creatures that are made out of rock and feed on rock. They haven't changed much throughout the series and appear to be the same mountain-dwelling race throughout all titles. All Gorons refer to themselves and each other as male; many Gorons have mentioned having brothers, fathers, and sons, but no mothers or sisters.

As a child, Link travels to Goron City in order to collect the Spiritual Stone of Fire, the Goron's Ruby. Darunia, the leader of the Gorons, is very mad because his people are starving thanks to Ganondorf, who blocked the entrance to Dodongo's Cavern, the Gorons' main source of food, after the Gorons wouldn't give him their Ruby. Link goes into Dodongo's Cavern, defeats the monster (King Dodongo), reverses Ganondorf's curse and retrieves the Goron's Ruby. Darunia then makes Link a Sworn Brother and later names his son after the hero.

Later in the game, Link must return after Ganondorf has revived Volvagia, an ancient monster that the Hero of the Gorons defeated once before using the Megaton Hammer, and kidnapped all the Gorons and threw them into the dungeon in Death Mountain. Once again, Link comes to rescue the Gorons and defeat Volvagia. Darunia is also one of the Seven Sages and a town is named after him in The Adventure of Link.

Other notable members of the Gorons are Medigoron and Biggoron, who both make swords. Biggoron is the only one who can make the true Biggoron's Sword; Medigoron's sword, the Giant's Knife, is not as durable and breaks after a few uses. 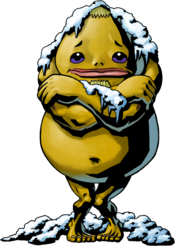 Gorons made their second 3D appearance in Majora's Mask, where Link could really see what it is like to be a Goron by turning into one with the Goron Mask. They were a crucial race in the game, connecting to one of the four temples. Some of the important Gorons were Darmani and the Goron Elder. They also led up to the two upgrades to Link's sword. The Goron Mask is by far the fastest ground transportation mask in the game. As Goron Link, Link drowns if he falls into water due to the fact that Gorons are heavy and cannot swim.

The Gorons reside within the snowy mountains of Snowhead, but they have a little crisis. The winter has caused trouble, the Goron Elder can't be found, his son won't stop crying, and Darmani, their great hero, has passed away. Link's role kicks in when he obtains the Goron Mask and becomes their new hero by making spring return, finding the Goron Elder, putting his son asleep and awakening the second Giant of the game.

In Oracle of Seasons, the Gorons live on Goron Mountain.

The Gorons inhabit the mountainous area known as Rolling Ridge, located in north-eastern Labrynna. They are a race of large humanoid creatures that eat rocks and are known to have tough skin, especially on their backs. For some reason, there happens to be more Gorons living in Rolling Ridge in the Past than in the Present.

Link helps the Gorons by defeating the Great Moblin who had built a fortress atop Rolling Ridge and halted the Goron's Bomb Flower growth. Link also uses a Bomb Flower to blow up a large rock that had landed on the Goron Elder, thus saving him and becoming a legendary hero amongst the Gorons.

Aside from all the normal Gorons, there are a few notable ones who differ in color and status, two of which are the Graceful Gorons of the Past and Present. In each era, there is a Graceful Goron who Link can dance with. If Link does well enough during the dance, he is rewarded with a prize. The first generation Graceful Goron of the Past, notable for his red-colored skin, gives Link the Mermaid Key once he shows him the Letter of Introduction. The fifth generation Graceful Goron of the Present, whose skin is blue, rewards Link with the Brother Emblem if he dances well enough. This item allows Link to access additional areas throughout Rolling Ridge.

A third different-colored Goron is known as the Goron Prophet, who has a distinctive green color to his skin. This Goron can be found in both the Past and Present in the Goron Dance Hall, although it's not clear whether it's the same Goron. He can apparently predict the future, and does so for Link if he is spoken to.

Gorons make an appearance in The Wind Waker in the Magic Armor Trading Sequence. There are three Gorons that can be found in specific places on the map that Link may converse with. Purchasing an item from one of the three Gorons costs Rupees, but it is worth it to get the prize at the end. After purchasing unique items from the Gorons, it can be taken to one of the other three Gorons. One of the two Gorons finds the item interesting, and trades Link something more valuable, but it costs Rupees to trade. After going through this process several times, Link finally has the most valuable item which can be traded with the merchant on Windfall Island to obtain his family treasure, the Magic Armor.

The Gorons have hats covering their faces, but a swing of the Deku Leaf reveals their true identities.

In The Minish Cap, the Gorons seem almost extinct and very few are encountered throughout Link's journey. A Goron can be found in Lon Lon Ranch working on digging up a cave. Link is able to fuse a Blue Kinstone with this Goron, which causes the Goron Merchant to appear in Hyrule Town. Later on in the quest, Link is able to fuse Kinstones with strange walls, found within caves. Doing so causes additional Gorons to appear by the cave in Lon Lon Ranch. When Link has successfully fused Kinstones with all strange walls, a total of six Gorons appear and it ultimately leads to acquiring a Bottle.

Once he appears in Hyrule Town, the Goron Merchant sells Kinstones to Link.

Additionally, there is one Biggoron who lives at the top of Veil Falls and makes the Mirror Shield as part of one of the post-game optional quests. 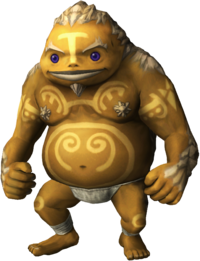 The Gorons reside on Death Mountain in north-western (Wii) Hyrule. They are ruled by a patriarch, Darbus, as well as a group of elders. They are generally taller than Gorons in earlier installments, but they retain most of the same physical features. Their complexion is decidedly more rough and rock-like, featuring a rocky "crust" that can be seen on their head and back areas, and they also have tribal markings on their skin. They now also wear fundoshi, which is almost certainly a parallel to real world sumo, in which a mawashi, a protective belt similar in appearance to the fundoshi, is worn.

The Gorons have a role in the story since the Goron Mines is the second dungeon of the game and the Fused Shadow resides there. At first, the Gorons and Hylians from Kakariko Village don't get along very well; in fact, Link can't even get into Death Mountain. But it is vital to restore peace between the two races so that Link can enter the Goron Mines and retrieve the second Fused Shadow. After the Goron Mines have been completed, neither Death Mountain nor the Gorons play a big role anymore. Most of them scatter across Hyrule to help with selling Hot Spring Water, digging pathways, or building bridges.

The key to restoring peace is by showing strength, and to do that, Link needs the Iron Boots to be able to stop a rolling Goron and win in a Sumo battle. When facing a Goron on Death Mountain, it is possible to knock them off balance by blocking their attacks with a shield; if they are not struck by a Sword, they curl into balls on the ground. If Link stands atop one while it prepares to unfold again, he is launched high up in the air, allowing him to reach high platforms.

In Phantom Hourglass, Gorons are found on Goron Island. They protect the valuable Crimsonine, which is needed to forge the Phantom Sword. Their leader is named Biggoron, and his son, Gongoron, assists Link in the Goron Temple. Unlike other games, Gorons in Phantom Hourglass seem to respect brains over brawn. To gain their trust, Link must pass a quiz, much different than the sumo wrestling in Twilight Princess.

In Spirit Tracks, the Gorons live in Goron Village and the Fire Realm. The Gorons give Link the Freight Car. 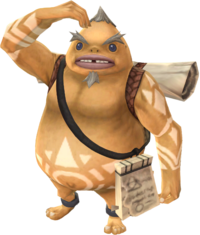 Only three Gorons are in Skyward Sword and they hold the appearance of the traveling merchant variety from The Wind Waker. Their names are Gorko, Golo, and Gortram. Gorko and Golo research ancient legends and Gortram runs the Rickety Coaster mini-game. 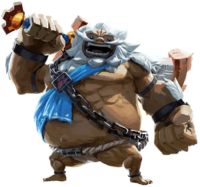 In Breath of the Wild, Gorons live in Goron City on Death Mountain. When Link gets there in order to free Divine Beast Vah Rudania and the Spirit of the Goron Champion, he meets Bludo, the Goron Boss, who tells him he needs to find Yunobo, a descendant of Daruk. Once Link does this, he discovers that Yunobo can, as a descendant of Daruk, use Daruk's Protection. He and Yunobo go to drive back Vah Rudania, and Link goes inside to free the Divine Beast. After Link defeats Fireblight Ganon, and frees Vah Rudania, Daruk gives Link Daruk's Protection.