From Zelda Dungeon Wiki
Jump to navigation Jump to search
Want an adless experience? Log in or Create an account.
Bohrin 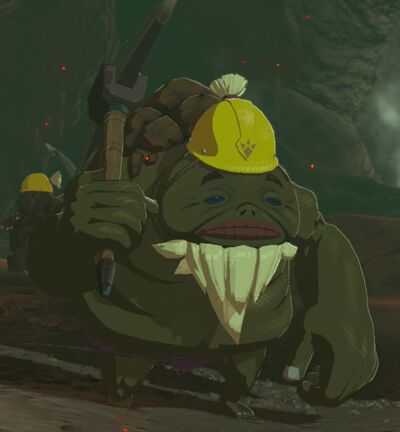 Bohrin is a character from Breath of the Wild.

Bohrin is an older Goron who can be found in the Southern Mine. He works for Dorill, who runs the Goron Group Mining Company at the Southern Mine. He takes the night shift, working from 9pm to 6am each night, before then heading to bed.[1][2] While he is asleep, he has some discomfort, as he can be heard grumbling.[3][4]

Bohrin doesn't like being bothered when he wakes up and is heading to work.[5][6] Once he starts working, he doesn't mind talking to Link. He's surprised that Link is around at this hour of the day.[7] Bohrin serves as a guide for the area, telling Link about his surroundings.[8][9][10]

Bohrin mentions that the group mines here at the Southern Mine and sells the ore for profit. The group is from Goron City and use to mine closer to the Death Mountain summit. However, due to the appearance of the Divine Beast Vah Rudania, the group has been forced to mine further away.[11] Bohrin mentions that Goron City is up ahead, but that the path can be quite dangerous.[12] While Bohrin is up there in age, he claims that he still has a lot of fight left in him.[13]