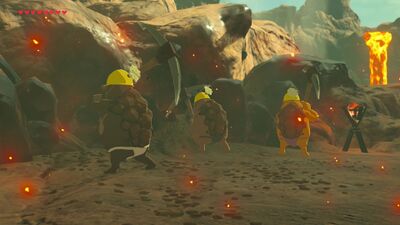 Goron Group Mining Company is a group from Breath of the Wild.

During the daytime, Dorill can be seen mining, alongside Greyson and Jengo. While Dorill and Jengo are proud of the work they do, Greyson is not nearly as enthusiastic. He is tired of the day to day and worries that he's going to toil into obscurity if he keeps this up. He actively asks Link if he knows of other work that require his level of strength.[3][4] Bohrin is also a miner who work the night shift for the mining company. While he's not as youthful as the rest of the group, he still feels that he has a lot of fight left in him.[5]