Goron City (Breath of the Wild)

"The home of the Gorons is located at the fifth stop on the road up Death Mountain. The land is intensely hot, so Hylians rarely visit. The Gorons' furniture is made of nonflammable metal and stone. Since the Gorons are not the most skilled with their hands, the resulting craftsmanship lacks some finesse but ultimately gets the job done. It is possible for Link to use a mine cart to get around up here."

Goron City is a location in Breath of the Wild.

The city can be found on the western side of Death Mountain; the searing heat makes it near impossible for anyone but a Goron to live there. The location is mainly a mining village, and the boss of the village acts like a foreman of sorts. If Link attempts to get to Goron City with no Fireproof Elixir or Flamebreaker Armor, he will catch fire and lose hearts. 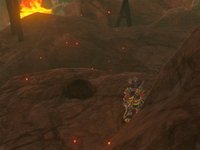 Lift the rock that's located under the rock sculpture's armpit. 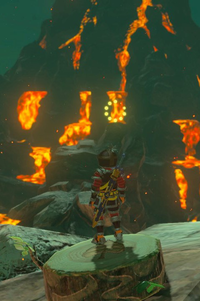 Climb to the top of the rock sculpture of Daruk's head to find the seed platform. Head east towards the ring before the time runs out.

The seed platform is at the top of the head, the ring is at the tip of the hand. Run to the ring.