From Zelda Dungeon Wiki
Jump to navigation Jump to search
Want an adless experience? Log in or Create an account.
Fugo 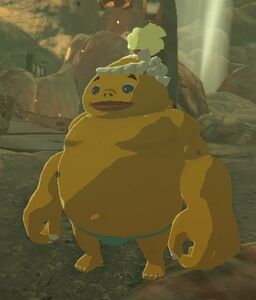 Fugo is a Goron from Breath of the Wild. He is the apprentice to the Goron City blacksmith Rohan, who he is in awe of, calling him a "godly blacksmith".

As part of his inferiority complex toward his master, he asks Link to defeat the Igneo Talus at Darunia Lake in the side quest "The Road to Respect" so that he can claim to Rohan that he defeated the Talus. While he will pay Link a Silver Rupee if he does so, he is too nervous to follow through and tell Rohan the lie.