From Zelda Dungeon Wiki
Jump to navigation Jump to search
Want an adless experience? Log in or Create an account.
Kayra Mah Shrine 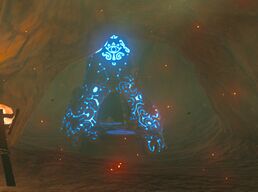 The Kayra Mah Shrine is one of the many Shrine of Trials found in Breath of the Wild.

Talk to Bladon who resides in a small hut in the north-west part of Goron City to start the quest.

Head to the Gorko Tunnel southeast of Goron City and talk to Gonguron, Bladon's brother, who is too fatigued to continue digging. Bladon will also run over and see his brother's condition. Bladon will then request you to get the next objective, one rock roast.

Head out the tunnel, turn slightly to the left, then go downhill towards Gortram Cliff. There are some Moblins and Fire ChuChu on the way to the bottom, but you can ignore them the first time you go down the path as they will respawn as soon as you pick up a rock roast (the respawn is a part of the quest intended to give you some difficulty). This area also has a few rock slides and falling boulders to avoid on both downhill and uphill during this quest.

One thing you can do to make the quest a little easier is this: as soon as you approach the rock roasts, the quest will update. At that point, turn around and you'll see the moblins and chuchus have respawned. Go defeat them, triggering the rock slides in the process. Once that's taken care of, go back, pick up the roasts, and enjoy a leisurely stroll back (but beware of steep climbs!). Alternatively, you can wear the Moblin Mask, or the Majora’s Mask on the way back, but you will still need to avoid the ChuChus and boulders.

If you do not possess the Majora's Mask, Moblin Mask, or any other item that can make you devoid of violence by monsters, then use Ice Arrows against them. (Hint: All monsters that master either ice or fire are vulnerable to attacks with weapons and arrows that possess the opposite element (Ice or Fire).

Once you grab a rock roast, take it back to Gonguron and Bladon to refill Gonguron energy and continue digging to shortly break the rock wall and reveal the shrine. Most find it easiest to kill the enemies rather than try to avoid them coming back up. Note that dropping the rock roast will likely make it roll to the bottom and fall into the lava pit at the very end of the hill (You cannot retrieve it once it falls in), however there are various ledges that you can potentially leave the rock roast on while you're fighting.

There's not much of a puzzle here; just run up the ramp and dodge stuff (use Stasis on the big boulders to give you time to avoid them, if needed). There will be many rupees falling down the slope as well to bribe the player into risking getting hit by boulders. While it might be a useful way to get rupees, its also very dangerous. Near the beginning of the ramp, on the right, is an alcove with a chest (Ruby). Once you make it to the top, turn around and on a ledge to the right (left as you're climbing the ramp) is the second chest (Bomb Arrow x5). Now head to the altar for your Spirit Orb.