From Zelda Dungeon Wiki
Jump to navigation Jump to search
Want an adless experience? Log in or Create an account.
Sharo Lun Shrine 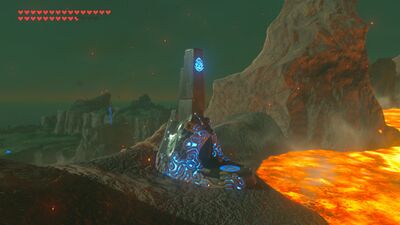 The Sharo Lun Shrine, also known as Blind Spots, is one of the many Shrine of Trials from Breath of the Wild.

This shrine is located near the summit of Death Mountain, and is accessed during the Divine Beast Tamer's Trial, as a part of The Champions' Ballad DLC pack.

Climb up to the top of Death Mountain and you'll find a blue circle has appeared on one of the pillars, just to the south. Go through the blue circle and another one will appear just to the east. Climb up and go through that that blue circle as well. There are now a series of circles that appear as you head down the mountain. Successfully go through all of them in the allocated time to get the Sharo Lun Shrine to appear.

The next area has some spikes that you must avoid, along with some Guardian Scouts that appear. You can shoot them with arrows, or just strategically move around the block, as well as using your shield to block their attacks.

The last moving blocks will require the use of Cryonis. Grab onto the hanging crate and then climb on top of it. As you draw closer to the water, use Cryonis on the waterfall, and then glide over. There is a treasure chest that is constantly falling and you break its fall by creating an ice block. Open it up to get a Great Flameblade.