From Zelda Dungeon Wiki
Jump to navigation Jump to search
Want an adless experience? Log in or Create an account.
Sheem Dagoze Shrine 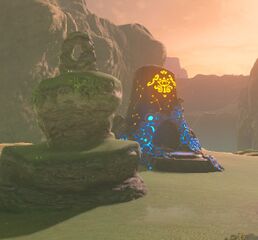 Sheem Dagoze Shrine, also known as Moving in Parallel, is one of the many Shrine of Trials from Breath of the Wild.

Talk to Kass to start this quest. The objective is to shoot a single arrow through two of the many rings on the field, at the same time. This is possible in at least a couple of different locations, the easiest probably being at the northwestern-most part of the ring field, facing south. But shooting a single arrow through any two rings will reveal the shrine and complete the quest.

Keep in mind that it's not possible to achieve this quest with multi-shot bows.

There is a single treasure chest in the distance, behind the platform. Use the Paraglider to make it over and open the treasure chest to get a Great Thunderblade. Then step on the switch, causing the nearby platform to activate. Ride it back and then head over to the alter to speak with Sheem Dagoze to get a Spirit Orb.