From Zelda Dungeon Wiki
Jump to navigation Jump to search
Want an adless experience? Log in or Create an account.
Joloo Nah Shrine 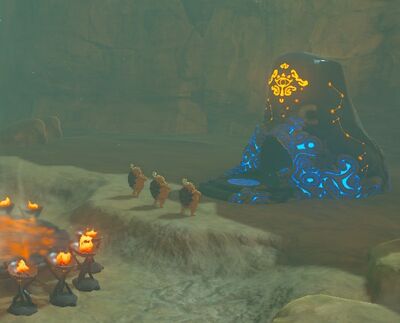 Joloo Nah Shrine is one of the many Shrine of Trials from Breath of the Wild. It appears after completion of the Shrine Quest "Test of Will", initiated by speaking to the Gorons from Gut Check Rock on Mount Nabooru. The puzzle in this shrine requires motion controls.

Shrine Quest: Test of Will

On Mount Nabooru, Link must endure extreme heat on two platforms longer than the three Goron Blood Brothers - Bayge, Heehl and Kabetta. If he succeeds, the shrine reveals itself. The first endurance challenge is meant to be completed by using the Desert Voe Set, whereas using a Fireproof Elixir allows the second challenge to be passed.

For the first terminal, move the cube around so that all six sides are powered up.

In the next area, first look to your left to see a chest on a ledge. Use the terminal to align the wind in such a way as to help you reach and open that chest, which contains a Golden Claymore.

Now align the wind so that the left two and top right windmills all spin. This just leaves the bottom right.

Glide to the switch for the left fan, where the cube was, and step on the switch yourself. All four fans should spin, and the gate should open. Use Stasis to hold the switch down as you make a break for the gate.

In the final room, first look up and see the chest on the wooden ledge up above. Burn the ledge to bring it down and open it to get a Gerudo Spear.

Now the objective here is to light all the torches simultaneously. Multiple solutions exist. One easy method is to use the chest on the switch, this removes one of the water streams. You can then use motion control to light all the remaining torches, tilting carefully so none get wet. You can also use motion control just enough to get all the torches out of the water, then light them with Fire arrows. Whatever works.

You may also use Stasis to stop the water pour from the fountain as well.

Once done, head to the altar and speak with Joloo Nah to get the Spirit Orb.