From Zelda Dungeon Wiki
Jump to navigation Jump to search
Want an adless experience? Log in or Create an account.
Keh Namut Shrine 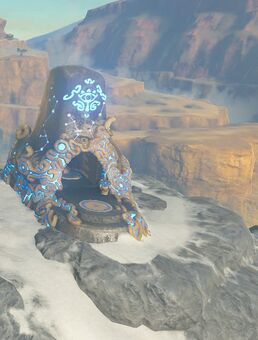 The Keh Namut Shrine, also known as the Cryonis Trial, is one of the many Shrine of Trials from Breath of the Wild.

The Keh Namut Shrine is located at the west end of the Great Plateau, west of the River of the Dead and northwest of Mount Hylia. As the shrine is located in a rather cold area, Link should acquire the Warm Doublet, or cook some Spicy Peppers to create Spicy Sautéed Peppers, giving Link some Cold Resistance, and allowing him to travel through the harsher climate. The easiest way to reach the shrine is to head west from the Temple of Time into the colder climate. From there, walk southward to get around the River of the Dead. Then follow the snowy to the northwest until you see the shrine in the distance.

At the nearby pedestal, please the Sheikah Slate to acquire the Cryonis Rune. This allows Link to create climbable ice pillars from any horizontal or vertical surface of water. Link can create three pillars of ice at a time. If a fourth is created the oldest pillar automatically is destroyed. Pillars, along with other large blocks of ice, can be destroyed by targeting them with Cryonis and pressing A.

A Guardian Scout I is ahead, which likes to retreat and shoot from a distance. Cryonis can be used to create cover, or use the Perfect Guard technique to deflect its attack. Once the enemy is defeated, look on one of the sides and you'll see a treasure chest on a ledge. Use Cryonis to reach it and open it up to get a Traveler's Spear.

Use Cryonis underneath the seesaw platform to reach the upper ledge. Examine the altar at the end of the shrine to meet Keh Namut and collect a Spirit Orb.

During the E3 2016 Treehouse presentation, Keh Namut Shrine was referred to as Shrine Ke Numut.