From Zelda Dungeon Wiki
Jump to navigation Jump to search
Want an adless experience? Log in or Create an account.
Dako Tah Shrine 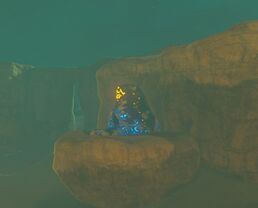 Dako Tah Shrine is one of the many Shrine of Trials from Breath of the Wild.

Shrine Quest: The Eye of the Sandstorm

Main article: The Eye of the Sandstorm

Nobiro can be found on the west side of Kara Kara Bazaar, on a slightly elevated platform. He sleeps at night, though. Talk to him to get begin the shrine quest. Find the shrine by heading north to the Great Cliffs to complete the shrine quest. A sandstorm covers the area during the daytime, but the sandstorm subsides between 9pm and 4am.

Run down the series of hallways, killing the Guardian Scout Is that appear. Soon you'll see a green powered electrical cable on the wall next to a moving platform. Ride the platform across and grab the Electric Cube with Magnesis. Now ride the platform back again, but the trick is it will only move if you hold the cube against the power cable on the wall with Magnesis.

Now take the cube up the ramp to the lightbulb. When charged, the lightbulb powers the platform. Ride it to the top, but don't forget to open the chest, which contains a Moonlight Scimitar, halfway up. Be careful not to drop the cube when you've reached the top - there's no way to get it back without being softlocked (Softlock section).

At the top, throw the cube on the metal below, instantly killing two more Guardian Scouts. Sweet. Be careful not to electrocute yourself here as the cube will power all metal objects that it touches. Open the chest underneath the ledge you just dropped down from, which contains an Ancient Core, then use Magnesis to push the large metal block out of your way. Leave the cube alone for now and head down the ramp to find a crystal switch. Hit it to activate a nearby platform.

Drop down below and at the bottom of the moving platform there is a treasure chest with a Silver Rupee. Ride the chest all the way back up and grab the electric cube once again. This time carry it and grab it to the elevator. Ride it up to the very top of the shrine.

At the top, drop the cube onto the charger to activate yet another moving platform. When riding this one, push the metal block away from you with Magnesis, but once you pass it safely, pull it back to where it started again to reveal the last chest. Jump to it when you get the chance and get the Radiant Shield inside. At this point you can wait for the moving platform to return or just glide over to the altar. Speak with Dako Tah to get the Spirit Orb.

It's important to mention that, aside from the loss of the cube, it's possible to also softlock oneself if one doesn't follow the ramp down after the guardians and instead falls down the middle chasm, as one ends up at the room where the cube started. The puzzle will be rendered unsolvable, as one needs the cube to activate the first elevating platform (as one can cross the chasm by walking carefully on top of the power cable). As such, the faster ways to get out without consuming resources are either reloading a save state, or getting out of the shrine to restart the puzzle.

Given the circumstance that one wants to continue the puzzle after falling into the chasm, in order to activate the elevating platform in said room, one can send a bomb floating with Octo Balloons attached to it up the chasm, and blow it up once it reaches the top, activating said platform's on/off switch.