From Zelda Dungeon Wiki
Jump to navigation Jump to search
Want an adless experience? Log in or Create an account.
Ta'loh Naeg Shrine 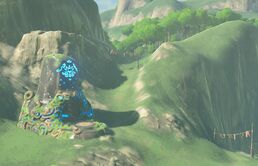 The Ta'loh Naeg Shrine, also known as Ta'loh Naeg's Teaching, is one of the many Shrine of Trials from Breath of the Wild.

Alongside Lakna Rokee Shrine, it's one of the two Shrines close to Kakariko Village.

This shrine serves as a combat tutorial, and will teach advanced techniques such as Perfect Dodge and Perfect Guard.

Two chests are near the entrance containing a Shield of the Mind's Eye and an Eightfold Blade. After defeating the Guardian Scout II, Link will find an Opal gem in the final treasure chest before examining the altar to get a Spirit Orb.

The shrine cannot be completed without equipping both a weapon and a shield, and Ta'loh Naeg will alert Link to do so.

After completion, returning to this Shrine will not repeat the tutorial and the guardian scout will not regenerate when the Blood Moon occurs. However the information can be accessed again in the Ability Controls section of the pause menu.