From Zelda Dungeon Wiki
Jump to navigation Jump to search
Want an adless experience? Log in or Create an account.
Rohta Chigah Shrine 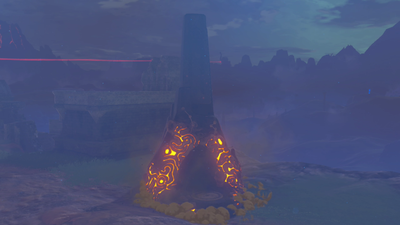 The Rohta Chigah Shrine, also known as Stop to Start, is one of the many Shrine of Trials from Breath of the Wild.

This shrine is located south of the Great Plateau Tower, and is accessed during the Divine Beast Tamer's Trial, as a part of The Champions' Ballad DLC pack as part of the One-Hit Obliterator Trial.

This Shrine is only accessible after returning to the Shrine of Resurrection and obtaining the One-Hit Obliterator. This weapon is used exclusively during this Shrine, and is the only melee weapon Link has during the quest.

The aim here is to defeat all the enemies in the surrounding area. Use the One-Hit Obliterator on the more difficult enemies, such as the Silver Lizalfos.

To identify and spot enemies obscured by the terrain, wear the Champion's Tunic.

Your bow is your best friend here, use your arrows liberally to take out the lower tier enemies. Use Bombs if you want to save arrows. Approaching the encampment from the south will provide Link a vantage point and a straight corridor to flee southward if he's spotted. The Lizalfos will stop pursuing Link once he's outside of range. It's recommended that the area is not approached from the north (from Ja Baij Shrine), as there is no cover there for Link.

Use your camera rune to identify the Decayed Guardians as the on you pass on the hill will sometimes not activate until after you have passed it, particularly if wearing stealth armor. The Obliterator will take those out as well.

This first room is full of moving spikes and there are two metal platforms available, in addition to a climbable metal box. Use Magnesis to move the box to the northeast section of the spikes and use the platforms to make a path to the box. Climb it and open the chest found here for a Forest Dweller's Shield.

The next room has two gears which move towards rows of spikes. Use Stasis to freeze one of the gears (we recommend the second one) and make your way to the next platform.

Here you'll find a few conveyor belts which drag you towards more spikes. You can use stasis here if you'd like to stop the belts, though you can make it through safely by just running.

After this you'll see a gap with three swinging spiky balls. You can shoot down the first one with an arrow as it is only attached by rope. You can use Stasis on another to freeze it, and you'll just have to swerve away from the final one if necessary.

The final section of this Shrine is to outrun a spike-wall which chases you. Many columns affixed with spikes will poke out and attempt to kill you. Just go as slowly as you approach different sections and you should be fine.

Once you get past the spikes, speak with Rohta Chigah to obtain a Spirit Orb.