From Zelda Dungeon Wiki
Jump to navigation Jump to search
Want an adless experience? Log in or Create an account.
Korgu Chideh Shrine 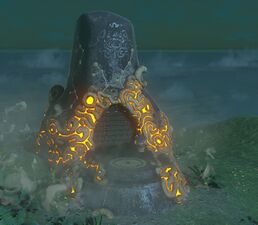 Korgu Chideh Shrine, also known as Korgu Chideh's Blessing, is one of the many Shrine of Trials from Breath of the Wild.

The Stranded on Eventide quest will begin as soon as Link steps foot on Eventide Island. The goal of the Shrine Quest is to acquire the three Orbs and place them in the various pedestals. Link will need to acquire the orbs which are protected by a Bokoblin treehouse to the east, a Blue Hinox near the center of the island, and a Bokoblin camp on top of Koholit Rock at the southeast portion of the island.

After completing the Stranded on Eventide quest, the Korgo Chideh Shrine will appear on top of the hill at the far southeast end of the map. The actual shrine is just a blessing, with a single treasure chest that contains a Gold Rupee. After opening the chest, run up to the altar and chat with Korgu Chideh to get the Spirit Orb.