From Zelda Dungeon Wiki
Jump to navigation Jump to search
Want an adless experience? Log in or Create an account.
Stranded on Eventide 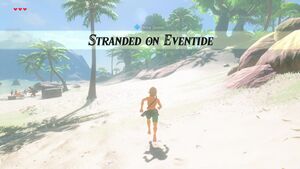 Stranded on Eventide is a Shrine Quest from Breath of the Wild.

Eventide Island is located at the far southeast end of the map, out in the Necluda Sea. In order to reach Eventide Island, Link will need to use a Raft or create a series of ice blocks using Cryonis. Alternatively, if Link has two full Stamina Wheels, Stamina Elixirs or Meals, he can use the Paraglider from Cape Cales to reach the island.

As soon as Link steps foot on the actual Eventide Island, the shrine quest will begin and all of Link's armor, weapons, equipment, and materials will be taken away. A way to get around these restrictions is to land in the water, just before stepping onto the sand. From there, toss some of Link's Weapons or Materials on the ground and then walk forward to begin the quest. Once the quest is started, Link can then immediately pick these items up again.

While you do not have any items, you still have any bonuses that you received from defeating the various Divine Beasts, which will certainly come in handy. It is recommended that Link visit Eventide Island after he has completed at least some of the Divine Beasts.

There are three Red Bokoblin along the Toronbo Shores. Use Bombs to explode the barrels here and acquire some basic weaponry, including some Boko Spears. Watch out for Water Octorok around the entire island. The recommended first orb to acquire is the one at the Bokoblin treehouse at the east side of the island. From higher ground, glide over to the watchtower to take out the Bokoblin archer and then clear the rest of the camp. Link will be able to acquire a Boko Bow or a Soldier's Bow. On the way to the treehouse watch out for multiple Forest Octorok along the way. Take the orb from the treehouse to the north end of the island and toss it into the water near the pedestal. Then use Cryonis to create ice blocks to lift the orb and place it in the pedestal.

Next, it is recommended to get the orb from the Blue Hinox. It is recommended that you clear two Red Bokoblin, one Blue Bokoblin, and some Electric ChuChu on the hill at the southwest of the island where the pedestal is located. Use bombs to defeat the Electric ChuChu's without having to get close, good timing with a bomb can take out the Red Bokoblins as well. After that the one on one fight with the Blue Bokoblin will be a piece of cake. From here, Link can Paraglide down and land right on top of the Blue Hinox. If he's quick enough, he can steal the orb before the Hinox even wakes up, avoiding the need to battle him. If the Hinox does wake up, Link will most likely have to battle him. At which point he'll need to collect items from around the island. Bow and Arrows from the Bokoblin treehouse to the east are helpful in fighting the Hinox. Grab the orb and place it in the pedestal at the southwest end of the map.

The third orb is on Koholit Rock at the southeast part of the island and it's heavily guarded by Bokoblin and a Blue Moblin. The trick is to try to get rid of the Bokoblin archers that are on the watch towers first. The rest of the enemies are challenging, but Link can always outrun them without the fear of being hit by arrows if the archers are down. Most of the enemies in this area have metallic weapons and there are often Thunderstorms on Eventide Island. Link can stay close and let mother nature do its dirty work, striking the enemies and defeating them.

Use Stasis on the slate that is on the pedestal to move it out of the way and place the orb to complete the quest. The Korgu Chideh Shrine will appear at the top of the hill at the southeast part of the island.

(Note: The no-weapons condition can be bypassed by sailing to the proximity of the island before triggering the quest and dropping one's desired weapons on the coastal water or on the raft. After the quest is triggered, the weapons can be picked up)