"Out where the sun sets on the horizon sits a small, remote island. It is inhabited by monsters, so even the fishermen of Lurelin Village won't go near it. If Link finds his way out to the island, a trial where he must steal orbs from fierce monsters without the aid of any of his equipment will begin." 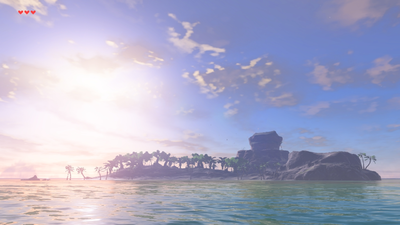 Eventide Island is a location in Breath of the Wild.

Eventide Island is a massive island at the southeast corner of the world out in the Necluda Sea. The island consists of the Toronbo Beach to the northwest, as well as the Koholit Rock mountain to the southeast. The rest of the island consist of a small forest and a tiny island out further to the east.

At the west side of the island there is a Raft that can be used to navigate the nearby sea.

Once Link steps foot on Eventide Island, this will begin the Stranded on Eventide shrine quest. Link will be stripped of all his weapons, armor, materials, and food, bringing up back to the initial state when he started his quest. Link will need to venture across the island, finding the three orbs on the island, and placing them in their pedestals. This will complete the quest and cause the Korgu Chideh Shrine to rise up on top of Koholit Rock. It is a Blessing shrine, and the reward is a Gold Rupee.

There are over a dozen treasure chests to collect on Eventide Island and these will help Link in tackling the rest of the island.