From Zelda Dungeon Wiki
Jump to navigation Jump to search
Want an adless experience? Log in or Create an account.
Koholit Rock 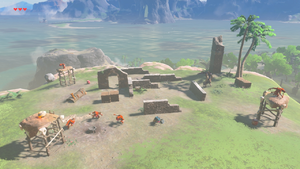 Koholit Rock is a location in Breath of the Wild.

Koholit Rock is found at Eventide Island, located at the higher elevation at the southeast region of the game. There is a Bokoblin camp, including a dangerous Blue Moblin in this area. In addition to a Cooking Pot, there are two treasure chests in the area, containing a Knight's Broadsword and a Soldier's Bow.

As part of the Stranded on Eventide shrine quest, Link will need to scale Koholit Rock where he'll encounter a Bokoblin camp. There is a large orb located within the camp and Link will need to grab it and place it in the pedestal. Doing so, along with also placing the other two orbs on Eventide Island in their appropriate location will cause the Korgu Chideh Shrine to appear at the top of the area.

After completing the Stranded on Eventide shrine quest and travel through the Korgu Chideh Shrine, Mimo will appear, sitting near the top of Koholit Rock. Link can speak with Mimo to participate in Mimo's Ring Course, a mini-game on the island involving the Paraglider. Link can use the item to glide through rings that Mimo has setup and if he travels through enough rings, he can win awards from Mimo.