From Zelda Dungeon Wiki
Jump to navigation Jump to search
Want an adless experience? Log in or Create an account.
Raft 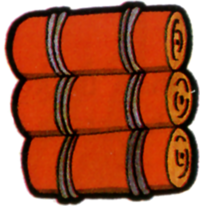 The Raft is an obtainable item in The Legend of Zelda and The Adventure of Link. This item is used by Link to travel across large bodies of water, like a lake.[1]

The only use of the Raft in The Legend of Zelda is to travel across large bodies of water to reach the other side. The Raft is found in the third dungeon of The Legend of Zelda, Level 3: The Manji; and in Level 4 of the Second Quest. It can only be used from docks.

In the First Quest, there are only two of these:

The Raft is found inside the Island Palace. Once acquired, Link can travel to Eastern Hyrule via the dock near the Harbor Town of Mido. This is the Raft's only use in The Adventure of Link.

Link can hire a raft from the Raft Shop to negotiate the Rapids Ride in the east of Koholint Island. During the ride, jumping from the raft at the right time can gain him the floating items including Magic Powder, rupees, hearts, arrows and bombs. He can disembark at stairs out of the water to obtain items on islands he passes by.

Rafts appear in Breath of the Wild, but not as obtainable items. Instead, they can be found all over Hyrule, by lakes, oceans etc. Link can use these rafts in conjunction with a Korok Leaf in order to control the raft's speed and move in a desired direction.

The Raft is found in Week 2, in Level 3 of MAP1 and Level 3 of MAP2. In both cases, it is used in Week 2 to reach Level 4, which is located on an island similar to the Level 4 island of The Legend of Zelda; and in Week 3 to reach the north-east corner of Hyrule where Level 5 is sited, along with the Magical Sword in Week 4. A whirlpool blocks access to the Level 5 area before the start of Week 3.