From Zelda Dungeon Wiki
Jump to navigation Jump to search
Want an adless experience? Log in or Create an account.
Rapids Ride 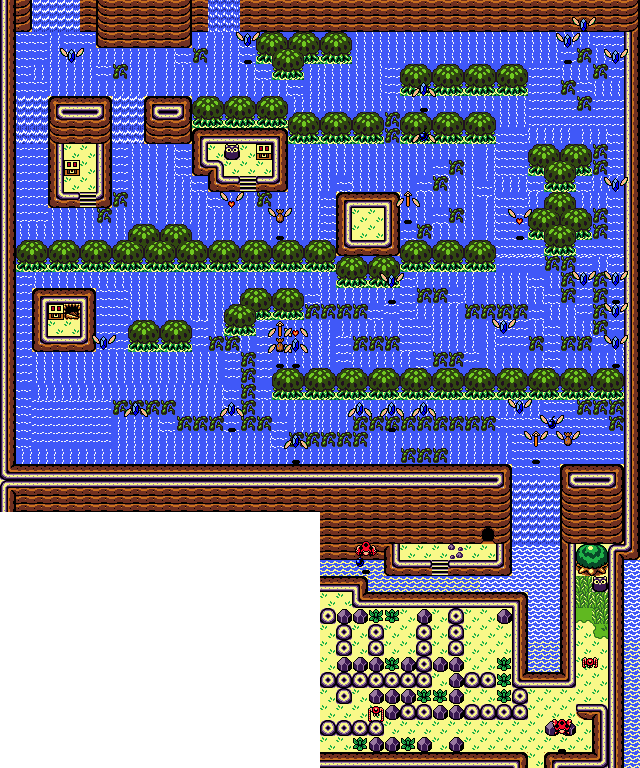 The Rapids Ride is both a major region of Koholint Island and a mini-game in Link's Awakening. The water-filled area is found in the east of the island, south of Tal Tal Heights and near the Face Shrine region. In order to access the area, Link must rent a raft in the Raft Shop for 100 Rupees.[1][2] After paying for it, Link can find the raft outside.[3] He can then take it down the river and fall down one of two waterfalls, which will lead to different sections of the Rapids Ride region.

Enemies only appear in the four southernmost screens, the only ones not entirely filled with water. Link can find Tektites and Bombers here.

During the game, Link must navigate through the rapids on his raft. He can use Roc's Feather to jump up and claim floating prizes in the air. Prizes include Rupees, Bombs, Arrows, Magic Powder, and Recovery Hearts. Two treasure chests can also be opened during the mini-game. Both of them contain 20 Rupees.

Two of Koholint Island's Owl Statues can be found in the Rapids Ride region.

This statue is found during the mini-game, next to one of the treasure chests.

The second Owl Statue is found near the southeast of the region, in the area that Link exits the mini-game via a waterfall.

While Link is exploring Face Shrine, the sixth dungeon of Link's Awakening, he can find an staircase in the northwestern corner of the map. The exit leads to the Rapids Ride region in the center of the mini-game area, where a small, otherwise unreachable island is located. Link can open the treasure chest there for a Secret Seashell.

After leaving the Rapids Ride game, Link can go to the left of the screen to find a staircase, where he can disembark from the raft. Upon going right again, he will find a cave. After swimming through the water with the Flippers, he can reach an exit which will lead back into Tal Tal Heights, just above the Raft Shop.