From Zelda Dungeon Wiki
Jump to navigation Jump to search
Want an adless experience? Log in or Create an account.
Mysterious Forest

The Mysterious Forest, also referred to as the Mysterious Woods in the original and DX releases, is a location in Link's Awakening. It is found in the very west of Koholint Island, next to Koholint Prairie. To the south of it is Mabe Village, and to the north Goponga Swamp can be reached. Link obtains the Tail Key here, which can open Tail Cave, the first dungeon.

At the beginning of Link's Awakening, after Link regains his sword on Toronbo Shores, the Owl appears and advises Link to head to the Mysterious Forest first.[1] Once Link returns to Mabe Village, Marin informs him that her father, Tarin, went searching for Mushrooms in the forest.[2]

Upon arriving in the forest, the Owl explains that the Tail Key can be found within the forest.[3] However, Link soon discovers that Tarin has been turned into a strange raccoon-like creature, and whenever he tries to head north from the area with the raccoon, he ends up in a different location. The raccoon admits that as long as he remains, Link will not be able to make sense of the forest.[4] However, he also says that his nose is sensitive to powder.[5] 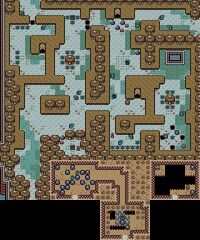 A complete map of the Mysterious Forest in Link's Awakening DX

The Mysterious Forest is unsurprisingly filled with trees. It is quite maze-like in structure; before Tarin is cured, the forest's layout changes depending on where Link goes. There are two caves in the forest, although one has two entrances. All of the entrances to both are made out of a hollowed tree log. It also has a different lighting from most other locations in the game, making it seem darker.

A Great Fairy Fountain is located in the east of the forest. The Great Fairy fully heals Link's hearts.

The Li'l Devil has an altar under a rock in the Mysterious Forest, just west of the Great Fairy Fountain. Using the Power Bracelet obtained from Bottle Grotto, Link can lift this rock and find the Li'l Devil, who will increase his Magic Powder, Bomb, or Arrow capacity.

The cave closest to the center of the forest leads to the Sleepy Toadstool. A sign is posted outside of it, warning about cracked floors.[11] The cave is only three rooms. The first room is filled with four Keese and numerous cracked floors, as well as crystal-like formations that can be cut down with Link's sword. A treasure chest is in the center with 50 Rupees inside. The second room is a small hallway with two green Zols. The third and final room has many blocks and two skulls that can only be lifted with the Power Bracelet.

The northern cave is another location in the forest. It is surrounded by heavy rocks that can be only removed with the Power Bracelet. After that, Link must use the Hookshot to cross the room and reach the Treasure Chest in the northwest corner, which contains only 50 Rupees.

In the 2019 remake, another Heart Piece can be found in this cave. Once Link obtains the Hookshot, he can grapple to a rock in the northwest corner of the cave and then reach the Heart Piece sitting there.

Link finding one of the Seashells

One of Koholint Island's Secret Seashells is in a treasure chest in the south of the Mysterious Forest. It can only be reached once Link has received the Power Bracelet. He can then move the heavy stone blocking the way to it. It is guarded only by two red Zols and the Moblin that is in the other half of the screen.

In the Nintendo Switch remake, there are two additional Secret Seashells added to the forest. The first can be found by digging with the Shovel in the center of a patch of flowers near the Li'l Devil's rock. The second is found in the northwestern most point of the forest, just before entering Goponga Swamp, by digging in between a patch of leaves.