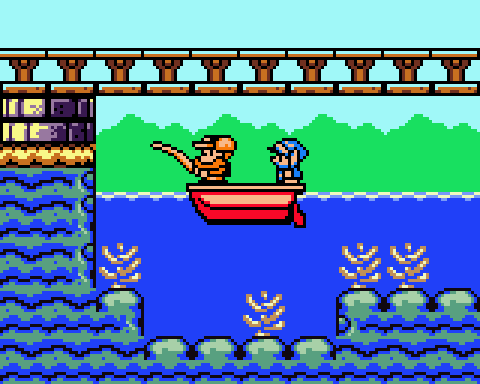 Under the Bridge in Link's Awakening

"SECRETS ARE LIKE WATER WHEN IT COMES TO BRIDGES."

Under the Bridge is a location that appears in four of the 2-D Zelda games. Link often needs the ability to swim before he can access the area. 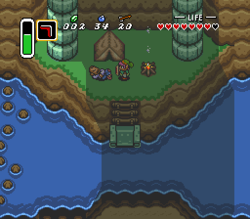 Under the Bridge in A Link to the Past

After Link acquires the Flippers, he can swim underneath the bridge located in the eastern portion of Hyrule. Link can access the area under the bridge by swimming up the river that flows to Lake Hylia, just north of the Pond of Happiness. Alternatively, if Link already has access to the Dark World, there is a ladder and some shallow water just east of the bridge. Link can use the Magic Mirror here to quickly get to the Light World.

Underneath the bridge, Link finds a Camper who appears to be homeless. The Camper appears to be sleeping and will not awake unless Link tries to speak to him. The Camper knows Link as he refers to him by name once he is confronted. The camper senses that Link is in a heap of trouble and offers Link a Magic Bottle.[1] After giving Link the Magic Bottle, the Camper falls back asleep and no longer communicates with Link.

The Under the Bridge area is found after Link uses the Flippers to dive beneath a bridge in Martha's Bay. One of Koholint Island's two Fishermen likes to fish here on his boat.

When Link first enters the Under the Bridge area, the Fisherman complains that he lost his Fishing Hook and cannot catch any fish.[2] If Link obtains the hook from Grandma Ulrira during the Trading Sequence, he can give it to the Fisherman.[3] The Fisherman will then catch the Mermaid's Necklace, which can be taken to Martha in exchange for one of her scales.[4]

In Four Swords Adventures, Under the Bridge is found in the Lake Hylia stage. The Links can swim underneath the wide bridge. After moving a large rock that can only be lifted by two, they find Tingle hiding underneath it. He thanks them for their rescue.[5] However, he then says that he plans on sharing Force Gems with the Links and leaves in his balloon.[6] 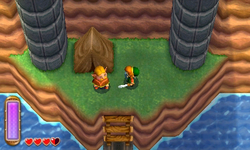 Under the Bridge in A Link Between Worlds

In A Link Between Worlds, Under the Bridge is found in the same location as A Link to the Past. When Link first enters, he finds the Bird Lover surrounded by Birds. However, Link's approach scares them away and the Bird Lover questions if he dislikes birds.[7] If Link tells him he does like birds, then the Bird Lover continues to talk to him and asks him if he needs anything.[8] He then tells Link that it is a very exciting day because not only has Link come to visit him, but he found a Bottle washed up nearby a while ago.[9] He gives Link the Bottle because he feels it is too exciting for him.[10]