From Zelda Dungeon Wiki
Jump to navigation Jump to search
Want an adless experience? Log in or Create an account.
Animal Village 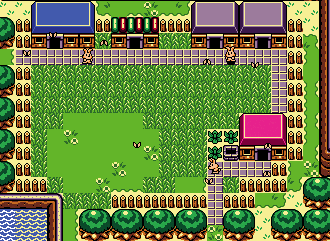 The Animal Village is a small settlement in the eastern region of Koholint Island. It is the sister village to Mabe Village.[1] All of the inhabitants are some kind of animal, and they are completely enraptured by Marin's singing.[2]

Link finds the village through an underground passage, which leads to the other side of the river that flows through eastern Koholint Island, after obtaining the Pegasus Boots. On his way to Yarna Desert, he passes through the village. Outside of the village, he finds a sleeping Walrus that is only awakened by Marin singing the Ballad of the Wind Fish. After Marin wakes him up, she stays in the village and sings for the animals. Grandma Yahoo also visits the village later on.