This article is about the speed-increasing footwear item. For other sorts of boot, see Boot (Disambiguation).

The Pegasus Boots are a recurring item in The Legend of Zelda series.

"Pegasus Shoes
The Pegasus Shoes are a treasure which was passed down by the family of the wise men. Sahasrahla believes in Link and gives the Pegasus Shoes to him when he shows him the Pendant of Courage. Activate the power of the Pegasus Shoes by holding the A Button for one second. Release the Button when Link sprints off. Great distances can be traveled in a short period of time by using the Shoes."

Referred to as the Pegasus Shoes in A Link to the Past, they are obtained from Sahasrahla after gaining the Pendant of Courage in the Eastern Palace. The Pegasus Shoes allow Link to run/charge at high speeds. Link holds his sword in front of him while charging, which in turn allows him to do damage to enemies. Charging with the Pegasus Shoes can be used for smashing rocks to open secret passages.

"This magic footwear has been handed down by the family of one of the Seven Wise Men. If you wear these shoes, you can run incredibly fast. You will get the Pegasus Shoes from the wise man Sahasrahla."

— A Link to the Past Manual

The Pegasus Boots are found in the room immediately before the boss of Level 1 during Week 1. After Week 1, Level 1 is blocked by a Thief, who gives all the permanent items from Level 1 which the Hero of Light did not collect during Week 1 to the Hero in a Big Bag, including the Pegasus Boots if missed. They are required to enter Level 3, which is otherwise blocked by a pile of rocks, and Level 7, which is blocked by an otherwise-immovable gravestone.

While they function mostly as in A Link to the Past, the Hero can change direction while using the boots without slowing down.

The Pegasus Boots are found randomly throughout Four Swords. They have exactly the same ability as the Pegasus Boots in A Link to the Past and Link's Awakening. Although, they are used in different ways such as running up steep slopes, defeating the boss of Talus Cave, and obliterating gel-like enemies that sometimes block Link's path. 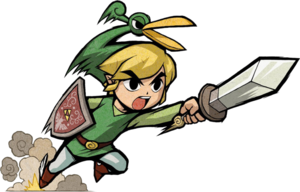 In The Minish Cap, the Pegasus Boots are received from Rem after waking him with the Wake-Up Mushroom. They are used to cross the Castor Wilds and reach the Wind Ruins.

A Tiger Scroll will give Link the ability to use a Dash Attack, which essentially just allows Link to use his sword while Dashing with both the Sword and Boots equipped.

The Pegasus Boots can be acquired after encountering the Shady Guy outside the cave where the Zora Queen resides. After he runs off after bumping into you, he can be found just below Sahasrahla's House in Kakariko Village. If he notices you, he will run off, so you must use Link's Merge to sneak up behind him. After sneaking up behind him, he will apologize and give you the Pegasus Boots.

The Boots can be used to knock enemies back and destroy bushes. They can also be used to ram into a tree or monument, knocking down anything on top of it.