From Zelda Dungeon Wiki
Jump to navigation Jump to search
Want an adless experience? Log in or Create an account.
Seres 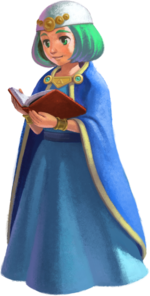 Seres is a character featured in A Link Between Worlds. She is the daughter of the Priest and is revealed to be one of the Seven Sages. [1] Seres is admired by both Dampé and the Captain, the latter which appears to have a romantic attraction towards her.[2]

After using the secret passageway through the Graveyard,[4][5][6] Link enters the Sanctuary to find Seres under attack by Yuga. Yuga has already turned the Captain into a Painting on the wall and will do the same for Seres. Seres is the first of the Seven Sages that Yuga will abduct. Seres will remain in Yuga's possession until Link reaches Lorule.

After Link journeys into Lorule, the seven sages are scattered throughout the overworld. Seres painting is hidden in the depths of Skull Woods, and Link will need to traverse through the dungeon and defeat the boss Knucklemaster in order to save her. Her portrait could be visibly seen within the Skull Woods, but the area is only accessible after defeating the dungeon boss.

Seres, along with the six other sages, uses her power to give Link the Triforce of Courage. After Link defeats Yuga Ganon and completes the quest, Seres returns to the Sanctuary and can be seen with both her father and the Captain.