From Zelda Dungeon Wiki
Jump to navigation Jump to search
Want an adless experience? Log in or Create an account.
Mysterious Man 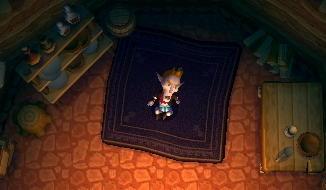 The Mysterious Man is a character in A Link Between Worlds. He can be found in a cave in the north of the Skull Woods. When Link arrives, he initially mistakes him for a rescue party before realizing he is only a kid.[1] He mocks Link for traveling out in the woods, explaining that he became lost because he was looking for adventure and "trunking" around in the trees and he has been trapped here ever since.[2] However, he claims that he found an interesting treasure out in the woods and offers to sell it to Link for 888 Rupees.[3] If Link accepts, the Mysterious Man scolds him briefly for trusting a stranger because that was how he got in his own situation.[4] However, he still gives Link the Golden Bee, as long as he has an Empty Bottle to put it in.[5]

The Mysterious Man appears to have some troubled history with love and money. When Link does not have enough money, he complains that money is the most important thing in the world, and he found that out the hard way.[6] He mentions that he used to believe that love was all one needed, referencing his favorite song from when he was younger, "You're All the Rupees I Need", but no one seems to remember that.[7] He also praises Link if he refuses to buy the unknown item for being cautious with his money.[8]