From Zelda Dungeon Wiki
Jump to navigation Jump to search
Want an adless experience? Log in or Create an account.
Woman 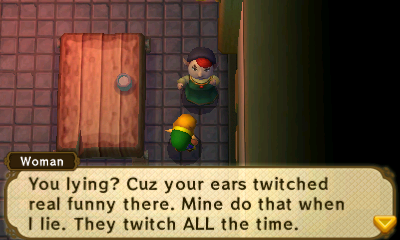 The Woman is a character from Lorule in A Link Between Worlds. She asks Link if she looks strong.[1] If he says yes, she thinks he is lying, because she saw his ears twitch like hers do when she is not telling the truth.[2] She insists that despite her weak appearance, she enjoys going to the Treacherous Tower up on Death Mountain, where the "tough guys" go, and she is shocked that Link does not know what the tower is.[3] However, if he says she does not long strong, she admits that she is weak, but she is trying to become stronger at the tower, and Link should not judge people by appearance.[4] In either case, she urges him to go to the Treacherous Tower to prove his sword skills.[5]