From Zelda Dungeon Wiki
Jump to navigation Jump to search
Want an adless experience? Log in or Create an account.
Gramps 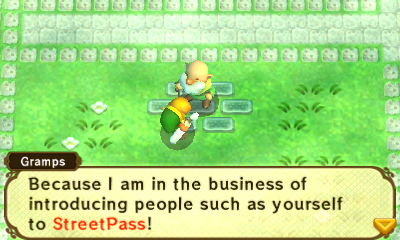 Gramps is a character who appears in A Link Between Worlds. He is a purportedly 80-year-old man[1] in charge of the StreetPass functions of the game.

Gramps can be found in the west of Kakariko Village. When Link first speaks to him, he promises that he can make passing people on the street more fun.[2] He offers to tell Link about StreetPass battles,[3] and if Link accepts, he explains how other players' characters arrive via StreetPass as Shadow Links and can be fought at no cost to Link.[4] After this, Link can set up his Shadow Link and select what items it uses. Once it is all set up, Gramps informs Link that he places a sign in the field in from of him whenever a Shadow Link appears.[5] Any time he speaks to Gramps, he has the option to view special StreetPass Challenges or listen to a second explanation of the rules.

When Link tags his first Shadow Link on StreetPass, Gramps commemorates the occasion by planting the StreetPass Tree near Link's House.[6] If Link speaks to him again after this, he asks if Link has visited the tree yet, and he can tell if Link is lying if he claims he has even though he has not. Every time Link tags a Shadow Link, Gramps lets him know that the sign is there to provide him with more information.[7]

Once Link completes all fifty of Gramps's StreetPass Challenges, he congratulates Link, but he claims that he is only the second person to do so.[8] If Link asks about the first, he merely asks if Link would like to fight a Shadow Link.[9] When Link says yes, he announces that he's going to give it everything he has, revealing that he was the first person to complete all of the challenges.[10] Gramps has every upgrade available in the game and uses two upgraded weapons at random.

If Link successfully defeats Gramps, he receives 5 Rupees as a reward. Gramps says he is happy to know that there are still heroes like Link in the world.[11] If Link wants to know why the reward for defeating him is so small, he informs the hero that all the Rupee rewards for defeating the Shadow Links came from his own pocket. [12] He began offering a reward in order to entice people stronger than himself to battle the more difficult Shadow Links.[13] However, he could not decide what the prize for defeating himself would be, so he made it a small amount.[14] After this, he asks if Link would like to battle again.[15] Even if Link declines, he can fight Gramps again at any time he wants by viewing his completed challenges.[16][17]

According to the Rumor Guy, Gramps wakes up at the crack of dawn to do one-fingered handstands.[18][19]