From Zelda Dungeon Wiki
Jump to navigation Jump to search
Want an adless experience? Log in or Create an account.
Witch 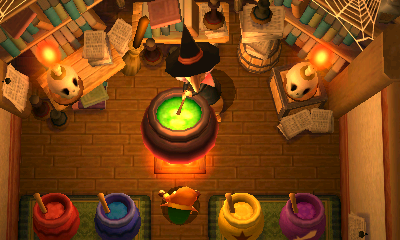 The Witch, or The Old Witch, is a character found in A Link Between Worlds. She can be found in the Witch's House near the entrance to Zora's Domain. She sells various potions inside of her house. She is always found mixing a potion, and if Link talks to her, she gives him a taste, refilling his hearts. Her only known relative is her granddaughter, Irene.

When Link first reaches the Witch's House, the Witch sells him some Red Potion at the cost of 50 Rupees as long as Link has a Bottle to put it in. She later sells Blue Potion, Yellow Potion, and Purple Potion, but needs enemy spoils to brew them including Monster Tails, Monster Horns, and Monster Guts.

After Irene has been captured by Yuga, the Witch gets very worried about her granddaughter, but continues to work on her potions to keep her mind off of it.