From Zelda Dungeon Wiki
Jump to navigation Jump to search
Want an adless experience? Log in or Create an account.
Official 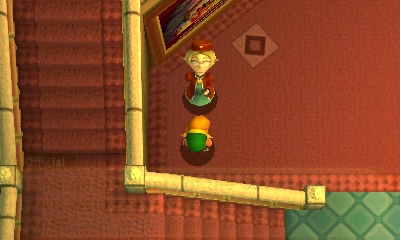 The Official is a character who appears in A Link Between Worlds. Serving the Royal Family of Hyrule, he holds an office in the monarchy and can be found on the first floor of Hyrule Castle in the room before the Throne Room, where is next to the first painting. When Link first comes to the castle to meet Princess Zelda, he can talk to the Official while waiting for Impa to announce him to the princess. When talked to, the Official tells Link the paintings in the room are spectacular and describe Hyrule's history and the Seven Sages.[1] Furthermore, the Official explains how Link can tell what order the events took place in the morals by the diamond-like symbols underneath every painting on the floor.[2] The Official informs Link that the descendants of the Seven Sages live among the Hyruleans currently and that it is common knowledge Impa is one of those descendants, concluding their discussion.[3]

While the Official can be found in this area before Link completes the Eastern Palace, Link is not able to discover him in Hyrule Castle when he breaks the barrier surrounding the castle or in the rest of the kingdom for the rest of the game.