From Zelda Dungeon Wiki
Jump to navigation Jump to search
Want an adless experience? Log in or Create an account.
Bard 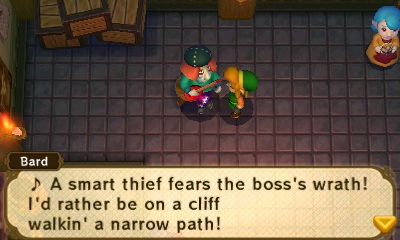 The Bard is a character from A Link Between Worlds who can be found at the back of Lorule's Milk Bar.

He begins his conversation with Link by scoffing that the boss of their village would never speak to the hero, partially because he is too busy hiding his painting of Osfala.[1] He jokingly says that the Thief Girl is better off not telling anyone if she knows where it is, unless she plans on telling him.[2]

He then asks Link if he wants to hear the new ditty that he created, which was inspired by these events.[3] His song is about how the boss will punish all of those who make mistakes, so most thieves fear him and would rather be walking on the narrow path of a cliff.[4]

The line about the cliff aids Link in entering Thieves' Hideout, when a voice at the door requests that he finish the lyrics of three songs found in the village.[5]