From Zelda Dungeon Wiki
Jump to navigation Jump to search
Want an adless experience? Log in or Create an account.
Hilda 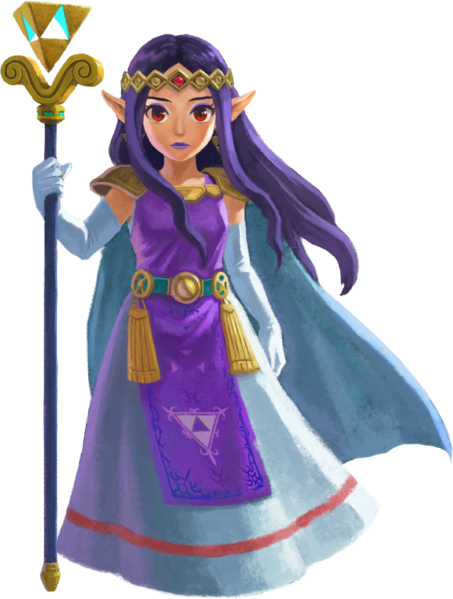 "Welcome to Lorule. My name is Princess Hilda, and I have failed you in every way."

Hilda is a character featured within A Link Between Worlds. She is the princess of the alternate world Lorule.[4] As Zelda's counterpart in this world, Hilda looks almost identical to her. Though similar, the two have some noticeable differences, such as eye color, clothing, hair color, and makeup. Hilda wields a staff that has the upside-down Triforce symbol of Lorule on it. 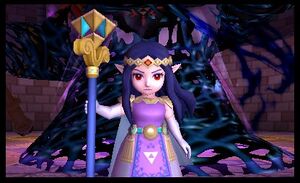 Hilda is first seen after Link first enters Lorule. Yuga summons Ganon using the power of the kidnapped Seven Sages.[5] Yuga combines with Ganon and gains the Triforce of Power, knocking out Link in the process.[6] However, just as Link is about to be destroyed by Yuga, Hilda appears and binds the monster with her power.[7] She explains that she can only hold him for a short while, but she takes the time to welcome Link to Lorule and introduce herself.[8] Even though she knew of Yuga's plan to imprison the Sages, she claims she was unable to stop him.[9] Knowing the extent of Yuga's power, Hilda warns Link that if Yuga is released, he will destroy not only Lorule, but Hyrule as well.[10] Yuga begins to break free, and Hilda tells Link that she can hold him back no longer and quickly warps both of them to safety.[11]

Once Hilda and Link are in a place of safety, she asks Link to do what she cannot: defeat Yuga.[12] In order to do so, Link must reach his full potential by rescuing the sages from the Lorulean dungeons they have been trapped in.[13] Hilda finally bids Link farewell and send him away.[14] 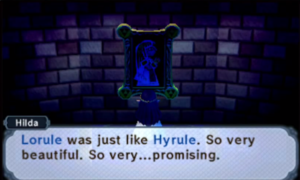 Shortly after Link meets Hilda, he is contacted by her again telepathically outside of the Blacksmith's House of Lorule.[15] She reminds Link that no matter how similar her kingdom is to Hyrule, it is very different, and they are only close together due to Yuga's plan.[16] Additionally, parts of Lorule have crumbled away, so she instructs Link to first find a way back into Hyrule and then return through a different location.[17] Hilda warns Link to be careful and then says goodbye.[18]

Throughout the game, Hilda contacts Link telepathically whenever he enters new locations in Lorule, always beginning by welcoming him back to the kingdom and ending it with "So say I, Hilda of Lorule."[19][20] She usually offers a hint as to what Link can expect to find in the area. Hilda shows that she has very extensive knowledge of all of the areas of her kingdom and seems to display some capacity for sensing the future. She also seems to hold many regrets over her kingdom's state of being. She often describes the greatness of its previous state of being compared to its current state, such as explaining that the Lorule Graveyard was once a holy place.[21] While Link is approaching the Dark Palace, she expresses remorse over the loss of many Lorulean soldiers, who abandoned the castle to follow the beast that sleeps within the palace.[22] She accepts full responsibility, blaming herself for being too weak.[23]

After Link rescues two Sages, she is seen talking to the portrait of Zelda, where she further describes her own thoughts and her hope for Link's success. She first longingly asks Zelda's portrait what it must be like to be from a kingdom with so many blessings.[24] According to her, Lorule was once a beautiful place as well, but it fell into ruin, and she needs Link's help to restore it.[25] She says that everyone deserves a happy ending.[26] She later continues these thoughts by telling Zelda how incredibly lucky she is to have such wonderful legends and heroes while Lorule has lost all of theirs.[27] She briefly fears that the Hero of Hyrule may fail her, but she quickly reminds herself that she must have courage and trust him.[28] Once Link has obtained all the Sages, Hilda is very excited by how close Link is to succeeding and she is grateful Lorule will be saved.[29] 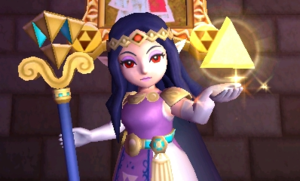 Hilda with the Triforce of Wisdom

Once Link saves all Seven Sages and acquires the Triforce of Courage, Hilda contacts him outside of Lorule Castle to warn him that Yuga has escaped and let his minions free throughout the structure.[30] She removes the barrier on the castle's entrance for Link so that he can go and conquer the evil being once and for all.[31]

Finally, when Link climbs to the top of the castle and enters the Throne Room, he again catches up with Hilda, who is standing in front of Zelda's portrait.[32] Link watches as she steals the Triforce of Wisdom from Princess Zelda. She congratulates Link on his work so far and begins to tell him the story about her land: they, like Hyrule, had a Triforce of their own.[33]

Similarly to Hyrule, a war broke out over who should possess the Triforce.[34] Eventually, after much debate, Hilda's ancestors decided to destroy the Triforce, never allowing man to reach it.[35] However, this turned Lorule into the sad state it is in now.[36]

Hilda, trying to restore the once great kingdom she rules, planned a scheme with Yuga to collect the Triforce of Hyrule to use as their own, thus restoring the land of Lorule.[37] Though she obtained the Triforce of Wisdom by capturing Zelda and the Triforce of Power from freeing Ganon, Hilda needed Link to lure out the Triforce of Courage, which would only appear in the spirit of the hero.[38][39] As she completes the story, she tells Link that she needs his Triforce.[40] She summons Yuga and orders him to take it from Link, thus beginning the ending battle.[41][42] 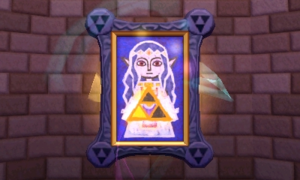 After Link successfully defeats the first portion of the battle against Yuga Ganon, Hilda is seen telling Yuga to give her the Triforce of Power he possesses.[43] However, Yuga betrays her, and takes the Triforce of Wisdom that she took from Zelda for his own by turning Hilda into a painting, hoping that he can obtain the full Triforce to take over Lorule.[44][45] With two pieces of the Triforce in hand, all Yuga has to do is defeat Link, and then he will have the entire Triforce.[46] This begins the final phase of the final battle.

After Link defeats Yuga once and for all, Hilda appears again, collapsed on the ground.[47] Link quickly frees Zelda. Hilda awakens, still desperate to find a way to obtain the Triforce, and admits to imprisoning Zelda in the painting.[48][49][50] Zelda tries to explain to Hilda that she understands her motives, but Hilda refuses to listen.[51][52] Hilda still intends to try and obtain the Triforce.[53]

However, Ravio, the character who sold items to Link throughout his journey, suddenly appears. He reveals himself to actually be a servant of Hilda and asks Zelda if he may speak to her.[54] Hilda is furious that Ravio has returned after vanishing for such a long time and believes he is betraying her.[55][3][56] 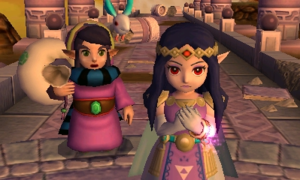 Ravio and Hilda after sending Link and Zelda back home

He explains to her that he left because he knew that destroying Hyrule was wrong, but Hilda does not believe there is another way.[57][58][59][60] He insists that what she is doing is exactly what caused the Triforce of Lorule to have been destroyed in the first place.[61][62][63][64] Ravio, wishing that he could have prevented Hilda from worrying about Lorule, begs Hilda to make the right decision. [65]

After listening to him, Hilda changes her mind.[66] Though Zelda tries to stop her, Hilda apologizes and tells the other princess how lucky she is to have a courageous hero like Link.[67][68] She promises to lead them out of Lorule safely.[69]

Hilda takes the pair to Lorule's Sacred Realm.[70] A crack that connects the world of Hyrule to Lorule is there, which is how Hilda and Yuga were able to sense the existence of another Triforce.[71] At last, Hilda uses the last of the power in Ravio's Bracelet to send Link and Zelda home to Hyrule.[72]

Once back in Hyrule, Link and Zelda use the full Triforce to make a wish: to restore Lorule's Triforce. In their own Sacred Realm, Princess Hilda and Ravio witness their Triforce reforming. Hilda thanks Link and Zelda, and the game ends.[73]