From Zelda Dungeon Wiki
Jump to navigation Jump to search
Want an adless experience? Log in or Create an account.
Demise 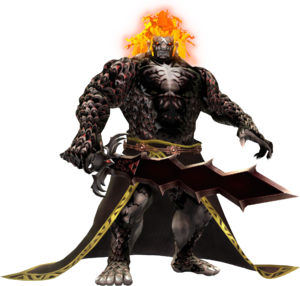 Demise is the Final Boss and main antagonist of Skyward Sword, the final form of The Imprisoned, and is the master of Demon Lord Ghirahim. Ghirahim successfully revives him in the World of the Past, and Link must defeat him. 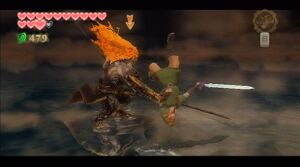 In the first phase, Demise will perform simple slashes and punches. It is easy to see when he is about to attack, but he attacks very quickly (despite his size), so this is where your skills with the Shield Bash are needed. Even with the Shield Bash, Demise won't be stunned at all; however, his guard will be down long enough to deal one or two slashes before he recovers. Also, don't overuse spin attacks, as a standard spin attack is slower than a regular sword slash. 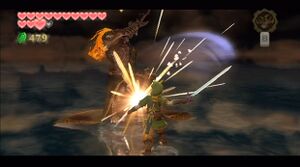 Attacking Demise with the sword

In other words, if Demise blocks your Spin Attack and decides to counterattack, you'll probably get hit and knocked back. The main goal during the first phase is to deal a few hits without getting killed. Don't be too risky, as you'll need your hearts for the second form. Demise takes a LOT of hits during his first phase, so just play it safe and don't waste your hearts in a hurry. 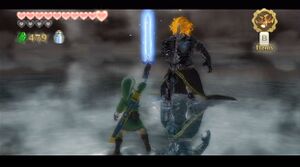 The second phase is a lot more dangerous, so restock on your hearts with potions if you're low. This time, Demise's sword is charged with lightning, meaning you can't attack blindly or you'll lose a heart through electrocution. Demise will be able to block nearly all sword attacks, so recklessly slashing at him is a bad idea. If you stay close to him, he'll mainly hack at you three times with his electrified sword, which you'll have to shield bash or dodge. His sword won't lose its power, though, so don't bother going into close combat at the moment. Instead, keep your distance and hold your sword up into Skyward Strike position (you can charge up lightning Skyward Strikes just like Demise). 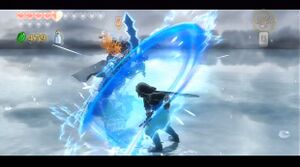 Attacking Demise with a charged attack

While you're at a distance, Demise uses devastating attacks that you must avoid at all costs. The first is a charge, where he leaps at you and slashes with his sword. This attack takes out two hearts, but can be stopped with a shield bash or by leaping backward. The second is trickier to handle; he sends out a lightning-charged Skyward Strike, dealing two hearts of damage. Unlike most attacks in Skyward Sword, you can't block this with a shield. Even worse, he sends it horizontally most of the time, making it tricky to dodge. You can evade this attack by dodging sideways, but it's often tricky to see which of the attacks he uses (his charge looks similar to the Skyward Strike before he attacks). 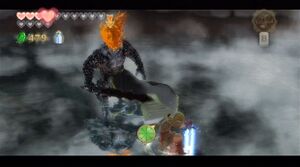 To defeat him, you can defeat him like you did in the previous phase (beware the lightning sword), or you can use Skyward Strikes against him. However, the Skyward Strike in this stage is different from the rest of the game, as it charges up at random. Remember that waiting for the Skyward Strike will leave you vulnerable to Demise, so get ready to dodge or block at any time. Once you send a Skyward Strike at him, he will be stunned long enough for you to run up and hack away until he recovers. At this point, you can keep charging up Skyward Strikes and slashing at him until he falls to the ground. Alternatively, you can use the Bug Net to reflect the electric sword beams which will stun him. 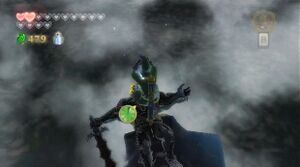 It's possible to beat Demise's first form very quickly if you have very fast reactions. This is great for the Thunder Dragon's Lightning Round, if you want to improve your best time for Demise. (Note that you can only do this on Hero Mode.)

The first thing to know is that despite his skill with the blade, you can still slip past his guard without having to use the shield bash. Slash at his left side, then the right side, then the left again very quickly to deal a hit; he will block the first two slashes, but the third will get him if done quickly enough. However, it's much faster to use your shield to shield bash and counterattack.

There are two ways to fight Demise using the shield bash: safe and slow, or quick and dangerous. It's best to play safe at first, but once you get used to his attacks, it's much faster to fight him the risky way. To beat him quickly, shield bash one of his attacks and immediately counterattack. Slash at him several times until he attacks again, then block. While seemingly simple, Demise will attack faster and faster if you don't retreat every now and then. It's very tricky to keep up a long combo of hits without getting hit and knocked back, but you'll finish him very quickly. Another key point is to aim at his legs (his left leg may be easier to hit for right-handed people). Hitting him there continuously will make him fall down, leaving him defenseless for several seconds.

Defeating Demise Without A Shield

If you want to prove your skill with the Master Sword, or prefer leaping away from attacks than cowering behind a shield, you can take on Demise with only a sword. While slower, you may conserve more hearts this way, and you'll be able to master the art of dodging.

Almost all of Demise's attacks can be dodged with a backflip, but a sidestep won't allow you to dodge some of his attacks since he slashes horizontally or diagonally very often. In fact, the backflip works for every attack except for his Skyward Strike (in the 2nd phase). For this attack, you must dodge sideways. Be careful not to confuse his Skyward Strike with the charging attack, as a sidestep won't let you dodge his charge.

For the first form, attack his left side, then his right, then his left again. Provided you do this quickly, you'll be able to land a hit. For the second form, there's not much difference with or without a shield as it can't block Demise's Skyward Strikes anyway.

After he is defeated, he vows that his hatred will manifest itself time and time again, and it will pursue the descendants of Link and Zelda as long as Hyrule is in existence; possibly hinting that he is the origin of Ganondorf.