From Zelda Dungeon Wiki
Jump to navigation Jump to search
Want an adless experience? Log in or Create an account.
LD-003D Dreadfuse 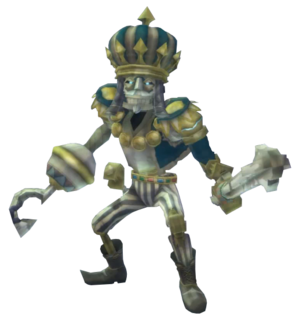 Dreadfuse is one of the Mini-Bosses present within the Sky Keep dungeon in Skyward Sword, being made by the same production line that created Scervo, this regal robotic pirate is more or less a supped up version of the previous model Link fought on the Sandship. Holding sword in his left hand while having a hook for his right, Dreadfuse has mirrored weapon wielding when compared to the previously fought Scervo, for said robot wielded his sword using his right hand and had a hook for his left. Some believe Dreadfuse is in fact just Scervo reborn even, but overall he was more or less placed within the Sky Keep as one of the many challenges the Goddess had set up for the chosen hero, and as such Link had to take him out.

Upon entering Dreadfuse's chamber, the door closes behind Link and Dreadfuse turns around and regards him with a static roar, and so with that a spiked gate popped up behind the young hero and the battle began. Considering that when compared to Scervo, Dreadfuse wields his weapons in the opposite hands and is fought on a much shorter gangplank, this in turn makes it so he may be recognized as that much more of a challenge.

Starting off the battle similar to the previous robotic pirate, Dreadfuse attempts to jab Link backward and skewer him on the spiked gate, however after some nicely timed Shield Bashing the young hero manage to get the upper hand and threw Dreadfuse off balance, soon slashing at what opening he got while avoiding the electrically charged sword the robotic pirate used to defend himself with. Unlike Scervo, however, it's not too often that Link got a chance to hit Dreadfuse more than twice each time. After a somewhat long timeframe of shield bashing and jabbing of his own, the young hero managed to get Dreadfuse to the end of the plank, in turn the robotic pirate's sword was sent flying into the abyss below and he drew his other blade to once again battle Link.

With that the second phase of the battle begins and the two of them charged at each other from opposing sides of the plank. Using slightly different tactics now, Dreadfuse attacks much more quickly in an attempt to push Link backwards in the spiked gate, however the young hero managed to fend the robotic pirate off once again and this time Dreadfuse's left arm was blown up and he lost his other sword. Enraged at this Dreadfuse growls out and shows that he's not done yet by attempting to swing at the young hero with his remaining hook.

Link back flips away and the third and final round of this battle begins, the two engage in combat with Dreadfuse now pulling off a two hit attack which involved him spinning his body around and then spinning it back into its previous position, this in turn causes his hook hand to possibly hit the young hero twice if he's not paying close attention. After pulling off enough nicely timed shield bashes, however, Link managed to push Dreadfuse back to the planks end once again where his hook then blew up and he fell to his doom.