From Zelda Dungeon Wiki
Jump to navigation Jump to search
Want an adless experience? Log in or Create an account.
Moldarach 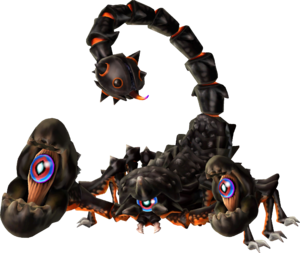 Moldarach, Thousand-Year Arachnid is the Boss of the Lanayru Mining Facility, the third Dungeon in Skyward Sword. It also appears inside the large room of the Shipyard. As its title suggests, a Moldarach may be able to live for millennia under the sand. 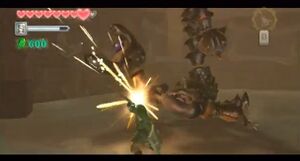 Attacking the eye on a claw

Moldarach's weakness are the eyes on its two claws. To harm him, Link will need either horizontally or vertically at the claws, depending on how Moldarach positions its claws. After being hit, the claw will turn black briefly, then turn colorful again, ready to be attacked further.

Caught by one of the claws

Moldarach has only one attack to harm Link. At some point, one of Moldarach's claws will turn red, signifying it will lunge at Link in an attempt to grab him. To counteract this, Link can simply dodge out of the way. If the claw grabs a hold of Link, he can simply shake to become free once more. After one claw has been sliced enough, it will disappear from Moldarach, cutting down his attack power in half. Link will need to continue the same method as before on the second claw to defeat the first phase of Moldarach. 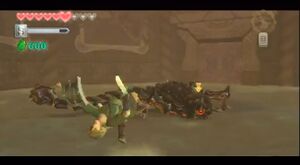 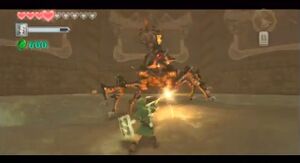 Stabbing Moldarach in the eye

When both claws are gone, Moldarach will change its attack pattern by diving into the sand to hide momentarily. You can follow its movements by watching the sand for a large bump, signifying where Moldarach is. You can either use the Gust Jar to blow away the sand covering it, or wait until it pops out of the sand.

After popping out of the sand, Moldarach will attempt to swing its tail at Link, trying to damage him with the spike on its tail. Link can roll or jump out of the way to dodge its spikes. Moldarach may also try to ram at Link with its entire body, taking a full two hearts of damage - its strongest attack. If Link is agile enough, he can dodge to the left or right to avoid it. As a last attack, baby scorpions known as Aracha will continually pop out of the sand and will try to attack Link. They are easy to defeat though, as they can be blown away with the Gust Jar or killed with one slice of the sword.

To finish Moldarach off, Link will need to stab the eye on the front of it. After being hit once, Moldarach will disappear back into the sand. After repeating this process a few times, Moldarach will be defeated.