From Zelda Dungeon Wiki
Jump to navigation Jump to search
Want an adless experience? Log in or Create an account.
Magmanos 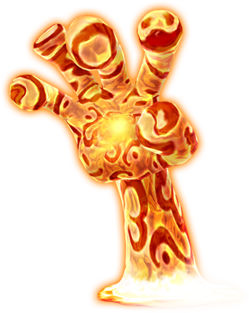 Magmanos are enemies found in the Fire Sanctuary. One pair works as the mini-boss of the dungeon. Link fights two of them in a room with a mesh floor. Magmanos are giant hands formed from the lava underneath the mesh floor. The palms of the hands glow, and they can in fact only be defeated after being struck by a water bulb, then being hit with Link's sword. After defeating Magmanos, Link obtains the Mogma Mitts, an upgrade to the Digging Mitts. The second Magmanos fight will reveal a secret passage, where Link can find an Empty Bottle.