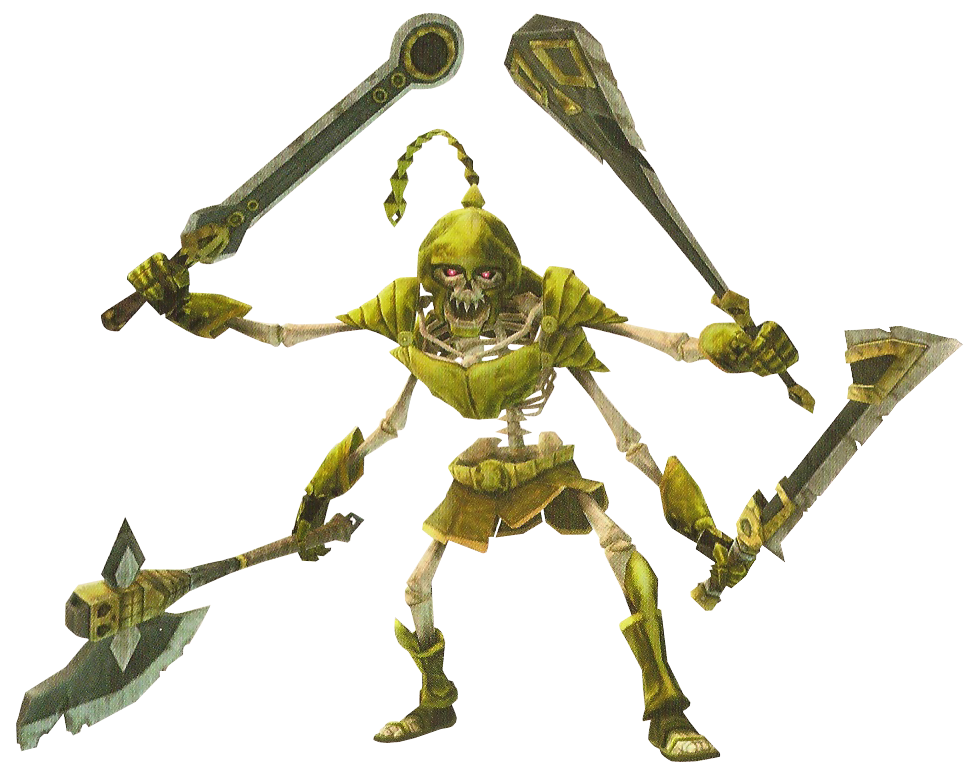 Stalmaster is a Mini-Boss featured in Skyward Sword. It is found within the Ancient Cistern. It is basically an upgraded Stalfos, with four hands instead of two. Furthermore, it has a bit more armor, as well. This creature was likely designed as a way to implement the game's new "one-to-one" swordplay.

The battle will start just like the fight with a regular Stalfos. It will block in two directions with his two arms. Slash in one of the directions that are not being covered. The Stalmaster is quick to change the direction that it is blocking and it will also slash multiple times in a row at you. Even when you try running away, the Stalmaster is quick to chase after you. Whenever Stalmaster is preparing for an attack, jump back to prevent yourself from getting hurt. Watch out as some of his attacks involve two strikes in a row. 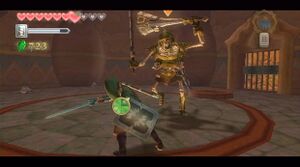 After several hits, the Stalmaster will pull out its two other arms, giving it four arms, each with its own weapon! The Stalmaster almost always blocks from three directions and sometimes all four of them. You have to be much more precise when angling your sword slashes. When Stalmaster blocks with all four swords, you can deliver a straight sword attack to harm it. Stalmaster sometimes attacks four consecutive times with its arms, so be careful not to rush in too quickly one it starts attacking. 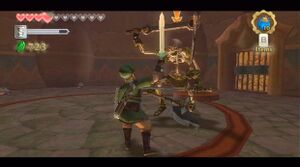 As the Stalmaster weakens it will change its defense even quicker. It gets to the point where it changes so quickly that you don't have time to react. Your best bet is to guess which opening he'll have and if you guess incorrectly, just jump back. Deliver the final sword slashes and Stalmaster will be defeated.

Stalmaster appears in Hyrule Warriors as an upgraded version of the Stalfos. Stalmaster has a possibility of dropping two upgrade materials, Stalmaster Wrist Bone, and Stalmaster's Skull.