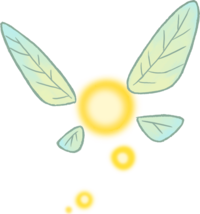 Tatl is the Fairy companion of Link in Majora's Mask. Tatl tags along with Link after being left behind by Skull Kid and her brother, Tael. She serves as a sidekick, telling Link information and weak points of enemies, almost identical to Navi. She makes bicycle bell-like sounds instead of Navi's yells though. She is also rather feisty and rude than informal, like when questioned about an enemy from Ocarina of Time, but gradually starts to like Link as the story progresses.

During a harsh storm, Tatl and her brother hid in a large log shelter to get out of the rain. Inside, they met a small child named Skull Kid. They became close friends, even though Skull Kid's mischievous side would ruin their friendship in the future.

One day, Skull Kid robbed a wandering Mask Salesman and brought Majora's Mask into his possession. By wearing the mask, Majora gained the power to influence Skull Kid's thoughts and actions. At first, Tatl was completely fine with the idea of stealing, though later she claims the robbery of the mask was unjustified.

While Link is traveling through the Lost Woods in search of "an invaluable friend", he becomes Skull Kid's next victim. Skull Kid knocks Link out, and steals his Ocarina. Fortunately, Link is able to snap out of it, and grab on to Epona just before Skull Kid takes off on her. Link is dragged, and lets go halfway through the woods. When Link catches up to Skull Kid, he is transformed into a Deku Scrub as some cruel kind of humor. While Tatl is making fun of Link in his new form, Skull Kid leaves the room, shutting the door which Tatl cannot open on her own. It is from there that Tatl and Link team up as a pair, and work together.