From Zelda Dungeon Wiki
Jump to navigation Jump to search
Want an adless experience? Log in or Create an account.
Kotake 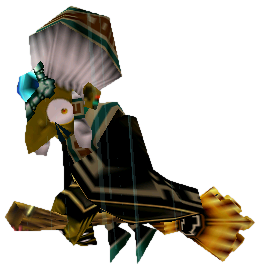 Koume as seen in Majora's Mask

Kotake is a Gerudo witch that appears in Ocarina of Time, Majora's Mask, and the linked ending of Oracle of Seasons and Oracle of Ages. Together with her twin sister Koume, she forms Twinrova.

Kotake runs the Magic Hags' Potion Shop. On the First Day, she can be found in her shop, but on the Second Day, she leaves to search the Woods of Mystery for the missing Koume. In either case, when Link tells Kotake about Koume's injury, she gives him his first Bottle, filled with Red Potion. If she has already given Link a Bottle in an earlier cycle, she simply fills it with Red Potion for free.

While she has Red, Green and Blue Potions on display initially, the Blue Potion is sold out for lack of ingredients[1]. If Link brings her a Magic Mushroom at the Potion Shop, she will brew one Blue Potion for him for free[2]. Subsequently, it can be bought for 60 rupees[3], but only within the same three-day cycle.

Main article: Twinrova#Oracle of Seasons and Oracle of Ages