From Zelda Dungeon Wiki
Jump to navigation Jump to search
Want an adless experience? Log in or Create an account.
Troupe of Performers 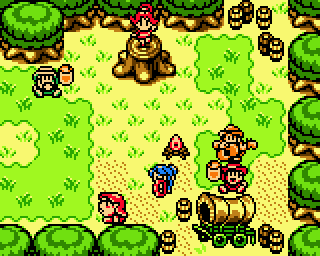 The Troupe of Performers[1], or Traveling Troupe, are a group of characters found within Oracle of Seasons.

At the start of his journey, Link is transported to the land of Holodrum where he is first found by Din. When Link awakens, he appears in North Horon next to a wagon. One screen to the east, Link finds Din, dancing on top of a Tree Stump, along with Impa and the rest of the Troupe of Performers. Din is the leader of the group and initially appears as a dancer.[2] Din asks Link to join him in dance.[3] Impa initially appears as the troupe's cook.[4]

After Din dances with Link, she notices the Triforce symbol on Link's hand.[7] Din mentions that it represents the sacred mark in Hyrule. After dancing, the troupe is overrun by Onox, General of Darkness. Onox reveals Din as the Oracle of Seasons and comments on the group's disguise.[8]

After Din has been captured, Link meets with Impa, who reveals that she is the nurse of Princess Zelda and that Din is no dancer. Impa was instructed to take Din to Hyrule in secret and thus disguised the group as a troupe.[9]

In a Linked Game, the group reveals that their disguise is just that, a disguise, and they are actually Hylian Knights.[10] The group of Knights were instructed by Princess Zelda to return Din to Hyrule.[11]