From Zelda Dungeon Wiki
Jump to navigation Jump to search
Want an adless experience? Log in or Create an account.
Din 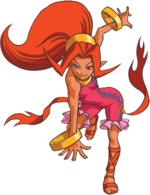 Artwork of Din from Oracle of Seasons

Din is the titular character of Oracle of Seasons. She is a spirited dancer from the land of Holodrum who is responsible for keeping the four seasons in balance.

In addition to her debut game, Din also plays a minor role in a Linked playthrough of Oracle of Ages and makes a cameo appearance in The Minish Cap.

Link is introduced to Din after being sent by the Triforce to Holodrum, where she is acting as a member of a travelling troupe of performers. The two of them dance together until the festivities are interrupted by the arrival of Onox, General of Darkness, who spirits Din away to his castle via a powerful cyclone. Onox plans to seal Din's powers in order to throw the seasons of Holodrum out of order and drive the land into chaos, which he does by trapping her inside a crystal prison. Link is given the task of rescuing Din by Impa, the nursemaid of Princess Zelda, who was masquerading as the troupe's cook in an attempt to smuggle the oracle out of Holodrum safely.

After gathering the eight Essences of Nature with help from the Rod of Seasons, which contains some of Din's powers, Link penetrates the defenses around Onox's castle and goes to confront the general. In the ensuing battle, Onox resorts to using Din's crystal as a shield against Link's attacks. The crystal will electrocute Link if he strikes it with his sword, but he can swat it away safely with a swing of the Rod of Seasons. Upon the defeat of Onox's true form, Din will be freed from her prison, and the seasons of Holodrum return to normal.

In the game's epilogue, Din can be found dancing in Horon Village with one of the members of her troupe nearby. When spoken to, she asks that Link dance with her again, and also mentions that Impa was called away to deal with events that are transpiring in the land of Labrynna. Din claims to feel a foreboding sense of dread about what may happen.

While Din does not appear in a regular playthrough of Oracle of Ages, in a Linked Game where Oracle of Seasons is completed first, she appears following the defeat of Veran, Sorceress of Shadows, in order to offer her aid to Link. After Princess Zelda is kidnapped by Twinrova, Din and Nayru combine their powers to help Link reach the Room of Rites, where the witches plan to use the princess as a sacrifice in order to resurrect Ganon.

Following Ganon's defeat, Din appears near the Maku Tree to congratulate Link on his victory, and suggests they go back to dancing together sometime.

Din also makes an appearance in The Minish Cap. She, along with Nayru and Farore, are looking for a house in Hyrule Town. Once Link finds her one, she offers him Din's Charm, which increases his attack power, as well as turns his tunic red, for a limited duration. Link may receive her charm free of charge, but he must have an Empty Bottle to place it in and is only able to carry one at any given time.