From Zelda Dungeon Wiki
Jump to navigation Jump to search
Want an adless experience? Log in or Create an account.
Knuckle 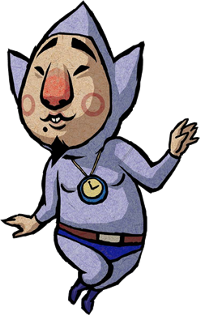 Knuckle is a character who appears in The Wind Waker and The Minish Cap.

Knuckle is the one who carved the Tingle Tower as well as its Tingle Statues.

When Link arrives at Outset Island with the Tingle Tuner, Knuckle engages the hero in a series of tasks. Upon successfully completing these challenges, Link is rewarded with the Hand-Me-Down Tingle Tuner when he visits Knuckle on Tingle Island.

Knuckle appears within the Trilby Highlands in The Minish Cap. Link is not able to reach Knuckle until after he acquires the Mole Mitts from the Fortress of Winds. He will only appear after Link has fused a Kinstone with Tingle in South Hyrule Field, and Knuckle will want to fuse kinstones with Link.[1] Fusing Kinstones with Knuckle causes a tree to become accessible in North Hyrule Field. After Link fuses Kinstones with Tingle, David Jr., Ankle and Knuckle, all four trees will be accessible in North Hyrule Field and it will lead to Link acquiring the Magical Boomerang.

Knuckle mentions that he is brothers with Tingle and Ankle, but that the one in white, David Jr., isn't really their brother. Knuckle appears agitated that despite not being related, David Jr. still dresses up like the three brothers.[2]

Even after fusing the initial Kinstone with David Jr., Link can fuse random green Kinstones with David Jr. Link is able to return to Knuckle at anytime to speak with him in which he will let Link know how many possible Kinstone fusions there are remaining in the world.