From Zelda Dungeon Wiki
Jump to navigation Jump to search
Want an adless experience? Log in or Create an account.
Gossack 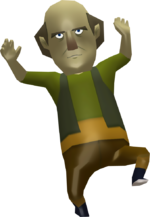 Figurine of Gossack from the Nintendo Gallery

Gossack is a character from The Wind Waker who can be found on Windfall Island.

Gossack can be found inside the Cafe Bar througout the day.

He will tell of some of the happenings around Windfall Island. Early in the game, he mentions that monsters from the Forsaken Fortress have been kidnapping young girls. He feels really worried as both Maggie and Mila have been kidnapped.[1] He mentinos that both Maggie's Father and Mila's Father are desperate to find anyone who can rescue their daughters. He is saddend as to what has happened to this world.[2]

He is easily scared, and jumps and shakes whenever there is a loud noise. Even the thought of being kidnapped makes him shiver when Link is talking to him.[3] Part of getting the Pictograph Box is to take a picture of him being scared. To do this, Link must break something or roll into the wall, then quickly snap a picture of him before he calms down.