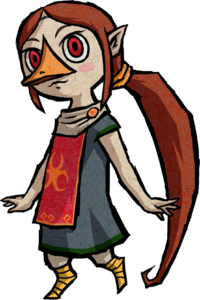 Medli is a character in The Wind Waker. She aids Link on his quest to calm Valoo in Dragon Roost Cavern. She carries a golden harp which has been passed down over many generations. Her clothes are decorated with a symbol resembling the Zora's Sapphire as seen in Ocarina of Time.

Medli is studying to become the attendant of Valoo, the deity of the Rito Tribe and guardian of Dragon Roost Island.[1] She is described as being serious and sincere, as well as a hard-worker.[2][3] She also has a talent in playing the harp.[4] Due to her attendant studies, she has some understanding of the ancient Hylian Language, allowing her to understand some of the words spoken by Valoo, who only speaks in ancient Hylian.[5] Her mentor was the grandmother of Prince Komali, a Rito who she developed a strong bond with. Medli explains that one day, Komali's grandmother saw her carrying her harp, and realized that Medli had a great fate in store for her, so she took her in as a student.[6] However, after her teacher died, the prince went into isolation, and Medli blames herself for not being as great of a woman as his grandmother.[7]

Link is first directed to Medli by the Rito Chieftain, who tells Link that Medli is carrying an item that he wants delivered to his son, Komali.[8] Link finds Medli in one of the island's upper rooms.[9] She comments on his clothes (either describing them as "green" or "blue", depending on whether Link is playing through the game for the first or second time on his file[10][11]) and, after introducing herself, hands Link the Father's Letter.[12] Before Link leaves, she asks if he will meet her later on outside of Dragon Roost Cavern because she has a favor to ask.[13]

Upon meeting Link after he has delivered the letter, Medli informs him of her intentions to calm Valoo, who has been raging at the top of the island, by visiting the shrine at the peak of Dragon Roost.[14] She isn't very confident in her flying, but she needs to reach the higher ledge that leads to the cavern.[15] Link can aid her by picking her up and throwing her to the ledge while the wind is blowing in the right direction.[16] Medli thanks Link and rewards him with an Empty Bottle.[17][18] She asks that Link keeps her expedition up the mountain a secret.[19]

On her way to Valoo, Medli is eventually imprisoned by Moblins. Link later enters the cavern and rescues her.[20] She urgently tells him that she learned that Valoo is acting angry because a monster is inhabiting the room that his tail falls into.[21] She promises to hurry back and explain to the other Ritos what is happening.[22] Medli then gives Link the Grappling Hook for saving her, an item the Ritos used before they evolved wings.[23] After showing him how to use it, she tells him not to worry about her as he goes up ahead.[24]

Link next sees Medli after defeating the monster beneath Valoo. She appears with Komali and urges him to apologize for his earlier behavior.[25] Valoo then thanks Link in Hylian, and Medli translates his message as telling Link to use the wind god's wind at the Wind Shrine.[26][27] Valoo also declares Link a true hero, which Medli eagerly agrees with.[28] Finally, Medli and Komali run off, with Medli giving Link one last thank you.[29] 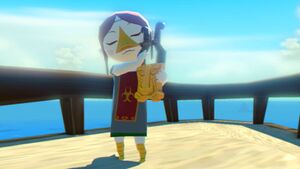 Later in the game, the Master Sword is revealed to have lost its power to repel evil. In search of a resolution, Link visits Headstone Island and meets the Earth Sage, Laruto, who once prayed to keep this power intact, but was killed by Ganondorf.[30] She tells Link that in order to restore the Master Sword's abilities, he must find her descendant and successor, identifiable by their possession of the harp she once used, and bring them to the temple to become the new sage.[31] She claims that the Earth God's Lyric will awaken them to their true destiny.[32]

Medli's harp is identical to Laruto's, and she is busy practicing on Dragon Roost Island. When Link conducts the Earth God's Lyric for Medli on the Wind Waker, she comments that the song feels familiar before passing out.[33][34] When she awakens again, she is armed with the knowledge that she is the Earth Sage.[35] She tells Link to take her to the Earth Temple on Headstone Island.[36] Though Komali passes overhead, she tells Link she wants to leave quickly, so that Komali only remembers her as an attendant.[37]

Medli is an integral part to navigating the Earth Temple. The King of Red Lions tells her before they enter the Earth Temple that she should come when Link calls her.[38] Additionally, he instructs Medli to fly and carry Link through the air if necessary.[39] Medli can also be controlled by Link if he conducts the Command Melody using the Wind Waker.[40] She tells Link within the temple that she is not very confident, but she will do her best to fly to inaccessible places if Link needs it.[41] Medli can also use her harp to reflect light, which can be combined with Link's Mirror Shield to complete some puzzles.[42]

Upon defeating Jalhalla, Medli assists in restoring the Master Sword to its true state by playing the Earth God's Lyric on her harp.[43] She remains in the temple to continue praying, telling Link to hurry and locate the Wind Sage to restore the rest of the sword's power.[44]

Medli is not seen again until the end of the game, where she is seen on board Tetra's Pirate Ship, greeting Link after his final battle with Ganondorf.