From Zelda Dungeon Wiki
Jump to navigation Jump to search
Want an adless experience? Log in or Create an account.
Medli's Harp 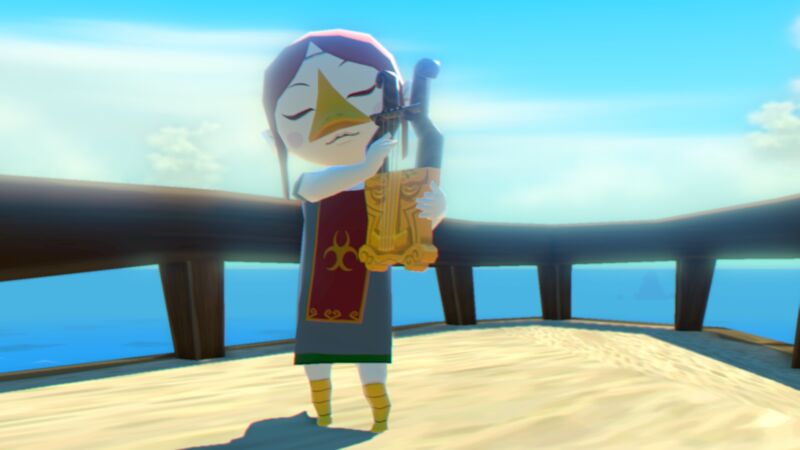 Medli playing her harp in The Wind Waker HD

Medli's Harp is an instrument used by Medli in The Wind Waker. She carries it on her back. It is a sacred harp that has been passed down through generations of the bloodline of the Earth Sage. Medli tells Link that Prince Komali's Grandmother chose her as an apprentice attendant to Valoo after seeing her fate in the curves of the instrument.[1] According to her, playing the harp is one of the duties of an attendant.[2] It is her most treasured possession.[3]

When Link meets Laruto, the deceased Earth Sage, within the Earth Temple, she tells him that her descendant can be identified by their possession of this sacred instrument, which she holds even in death.[4] Once Link completes the Tower of the Gods, Medli can be found practicing the harp on Dragon Roost Island. One of the Ritos nearby comments that she has become really good at it.[5] Link can take out the Wind Waker in front of Medli and conduct for her.[6] If he conducts the Earth God's Lyric, Medli learns the song from Laruto on her harp and is awakened to her destiny as the Sage of the Earth Temple.[7][8]

Within the Earth Temple, Medli's harp is the only thing that can open certain barriers. Once Link conducts, Medli plays the Earth God's Lyric and the barrier is destroyed.[9] In addition, Medli's harp can be used to reflect light within the temple to solve puzzles.[10] At the end of the temple, Medli plays the Earth God's Lyric with Laruto to restore half of the power to repel evil to the Master Sword.