Tower of the Gods

From Zelda Dungeon Wiki
Jump to navigation Jump to search
Want an adless experience? Log in or Create an account.
Tower of the Gods 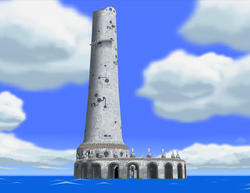 The Tower of the Gods is a Dungeon used to test the courage of heroes to see if they are worthy of being an actual hero. It has only been seen in The Wind Waker. Before Link begins his quest, the tower was deep under the sea and was a mystery. After Link gathers all three of the Goddess Pearls and places them in their correct shrines of the Triangle Islands, the tower raises up out of the Great Sea. Inside the dungeon, Link obtains the Hero's Bow, and also learns the Command Melody.

The main focuses of the dungeon are the elements water and light. Link uses his boat, the King of Red Lions, to move throughout the dungeon, but the going is slow considering there is no wind indoors and they can only cruise slowly around. The dungeon is filled with water, which raises and lowers on regular intervals. On the first floor, Link must move statues to open new rooms which eventually end up in changing the water flow and opening up the passageway to the second floor. On the second floor, Link must guide the three Servants of the Tower using the Command Melody or his hands and bring all the statues to the altar in the center of the floor to cause the Hero's Bow to appear. Using his newfound weapon, Link now has access to the third and final floor. Solving a puzzle there gives him a Boss Key, the key needed to enter the room where the dungeon's boss awaits.

There is a Tingle Statue hidden within the Tower. It is located in the first room behind the raging waterfall. In the room with the Beamos and Rats, there are elevating platforms in the back of the room. Link must alternate jumping from one to the next to reach the top. However, if Link turns around at the top, he finds a stationary platform. If Link stands on this platform and places a Tingle Bomb on it in the Nintendo GameCube version or a regular Bomb in the HD remake, a Treasure Chest appears. This contains the Goddess Tingle Statue.

Gohdan, a floating head with a pair of hands, is meant to be the final test for the hero's courage. The boss is relatively simple for Link as he can equip his newly found Bow and aim for the weak spot on Gohdan's gargantuan hands. The young hero can then aim for its eyes and proceed to throw a Bomb in its mouth. Repeating this process three times allows Link to be victorious in his final test of courage. Gohdan also relinquishes a Heart Container for Link to obtain. The young hero can now proceed onwards to the highest point of the dungeon. There, Link rings a bell using his Grappling Hook, creating a portal to the flooded Hyrule, which is now a quiet realm under the ocean.