From Zelda Dungeon Wiki
Jump to navigation Jump to search
Want an adless experience? Log in or Create an account.
Tingle Bomb 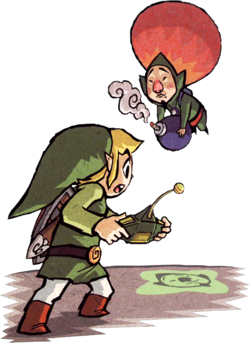 Tingle Bombs are items that have appeared in The Wind Waker and Tingle's Rosy Rupeeland.

Tingle Bombs first appear in The Wind Waker and they are one of the features used with the Tingle Tuner. In order to use the Tingle Tuner, the player will need to have a Game Boy Advance Game Link Cable. Link can use the Tingle Tuner to purchase a Tingle Bomb for 10 rupees. Tingle will drop a bomb and it acts similar to that of a traditional Bomb. These are required to uncovering the five Tingle Statues, that are located in the major dungeons of the game.

In The Wind Waker HD, the Tingle Tuner is replaced with the Tingle Bottle. Thus, it has completely different functionality and there are no Tingle Bombs. Traditional Bombs work similarly as Tingle Bombs do and can now be used to find the five Tingle Statues. However, during Link's first journey through Dragon Roost Cavern, he does not have a Bomb Bag yet, so he cannot drop Bombs. Thus, he unable to acquire the Dragon Tingle Statue until later when he can use Bombs.