From Zelda Dungeon Wiki
Jump to navigation Jump to search
Want an adless experience? Log in or Create an account.
Bomb Island 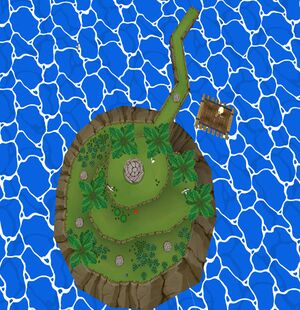 Bomb Island is one of the many islands scattered throughout the Great Sea in The Wind Waker. One square south is the Forest Haven, to the north is Eastern Triangle Island, to the west is Private Oasis, and to the east is Bird's Peak Rock. The island itself is shaped like a bomb, hence its name. This island is one of the seven spots that the Ghost Ship visits. Also, on the grass that decorates the island is one of the Traveling Merchants. There is a small line of jars containing Rupees, but are difficult to reach from the spiky vines blocking the path. Also, southwest of the island is a Submarine, which, after defeating two Blue Bokoblins and one green Bokoblin inside of it, gives Link an Empty Bottle.

In the middle of the island is a rock which can be blown up with bombs. Underneath the rock is a secret cave. Inside the cave, Link will find Magtails along with floor switches. Stunning the Magtails and using them to hold down the switches will open new passageways. One of the switches has fire surrounding it, so Link must throw an object accurately to press it down.

There are two Pieces of Heart hidden on this island. One of them is inside the hidden grotto underneath the bomb-able rock in the center of the island inside a treasure chest after Link extinguishes the fire surrounding it. The other Piece of Heart is outside the island in the sea and can be found only using a Treasure Chart found in the Earth Temple.