From Zelda Dungeon Wiki
Jump to navigation Jump to search
Want an adless experience? Log in or Create an account.
Auction House 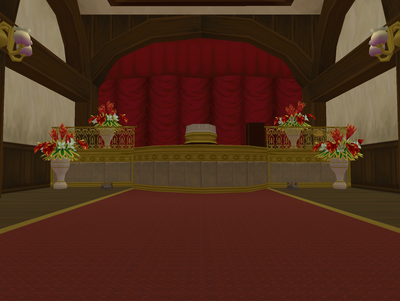 The Auction House, also known as the House of Wealth or Hall of Wealth, is a location in The Wind Waker. It is located on Windfall Island. Initially owned and operated by Mila's Father, the greedy man loses his fortune to the Pirates after Link rescues Mila from the Forsaken Fortress.

After Link rescues Aryll and the other girls from the Forsaken Fortress, Maggie and her Father gain ownership of the house. They became rich after getting Skull Necklaces from a Moblin named Moe. When Link gives 20 Skull Necklaces to Maggie's Father, he rewards him with a Treasure Chart.

On the first floor of the building, Zunari runs the Auction nightly where he sells rare items including two Treasure Charts, a Piece of Heart, a Joy Pendant, Magic Armor, and the Swift Sail in The Wind Waker HD.[1] After Link travels to Greatfish Isle and then returns to Windfall Island, the Great Sea will be in the midst of an Endless Night, with constant thunderstorms. This causes Zunari to cancel the nights auction.[2]

The Moe and Maggie side quest revolves around the locale. If Link unites the lovers, he will be rewarded with a Piece of Heart.